Oil by Rail proposal rolls into view once again 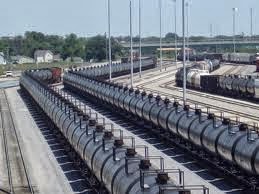 The weekend provided for a flurry of media reports that the path of Alberta oil may one day make its way to Prince Rupert, as a CN discussion paper from March made a bit of news for the cycle on Sunday.

Word that the Chinese energy giant CNOOC, through it's Canadian purchase Nexen had been nudging Canadian National towards putting in motion an oil by rail option, made for much conversation on twitter yesterday, as the social media outlet fed the quest for more information on the subject of how the oil companies of North America will seek to get Alberta's oil to world ( or in this case mainly Asian) markets.

The first story on the percolating thoughts of an oil by rail transit first came through the Canadian Press, where Bruce Cheadle's article gained wide review both at the Financial Post and other Postmedia newspapers across the nation.

From that point, his work was picked up by the national forums of the CBC, Globe and Mail and many other media outlets, all offering up more reading material for a Sunday morning.

With the Financial Post headline suggesting that the volume of shipments by rail could match that of the proposed and controversial Northern Gateway pipeline, the prospect of an oil by rail delivery system would clearly be a major change for the CN rail corridor through Northern British Columbia.

The main thrust of the Sunday review by way of documents obtained by Greenpeace, accessed through the Freedom of Information Act, revealed that internal memos highlighted that discussions on the proposal took place last March with Natural Resources Canada.

CN for it's part responded to the Canadian Press with the statement that no specific crude-by-rail project to Prince Rupert was discussed at that time.

However, the door it seems is not closed to that possibility in the future.  With CN stating to the news service that it will continue to explore new opportunities "to move crude oil safely and efficiently to markets."

Any oil by rail project is one that could be  in place fairly quickly considering that Canadian railways already have the ability and permission to move oil by rail, with no large scale review required to commence the shipment process, (building an export terminal may be another story though).

Perhaps something that wasn't given much thought of a year ago,  Oil by rail transportation however, is now something that is under the micro-scope following the Lac Megantic tragedy of earlier this year.

The re-emergence of the oil by rail prospects for Northern British Columbia comes as the Northern Gateway pipeline proposal has received a less than enthusiastic welcome across Northern BC.

For many, the new talk of the rail proposal has all the makings of a Plan B, should the pipeline proposal fail to move forward.

Faithful readers of our blog and attentive news fans of the Northwest will know that the oil by rail proposal is not something new to the Northwest.

CN first made mention of it some four years ago, the project prospectus seemingly something that is sitting on a shelf somewhere in an office at the railway. But at the moment, according to CN's recent comments to the Canadian Press, it is not one that is an active development mode.

Some of our most recent reviews of the possibility of oil by rail can be found below:

May 2013-- Oil by rail option continues to generate interest in Canada and overseas
March 2013-- The Oil by Rail Option, CN builds infrastructure for the future
February 2013-- The next battle over Bitumen?
November 2012-- Alaska to Alberta rail option could have an impact on Port of Prince Rupert

With the Chinese energy giant CNOCC investing much of its interest into Alberta oil, it would seem obvious that they want to find some way to make sure that the oil makes it to their destinations of choice.

Whether it be through Kitimat, Prince Rupert or some other potential export route, such as the recent presentation of a Northern BC route to Valdez, Alaska.

Interestingly enough, CNOCC, last week we outlined that CNOOC/Nexen is looking to put its footprint on the North Coast, perhaps through development, or shared development of an LNG terminal in the Grassy Point region.

Should they find success in that ambition, the added prospect of moving oil through Prince Rupert would in effect, make the North Coast port the energy export hub for the company's North American investments.

So far on the North coast, the main coverage of the re-emergence of oil by rail has come from the CBC Daybreak North program. With the Sunday story from CP the subject of some investigation both through the morning radio program and in social media through a variety of twitter feeds, where some of the background on the story has played out.

Considering the discussion that even the mention of a March conversation has had on the topic, we imagine that the oil by rail proposal will make for much in the way of news coverage over the months to come, whether through twitter or on the various news platforms of the province and the Northwest.

We'll offer up some of those contributions to the discussion below.

PG Citizen-- Eco group rails against oil plan
CBC BC Almanac-- Rail Transport of Bitumen (Podcast audio from 30 seconds to 23 minutes)
CFNR-- Coastal First Nations reject crude by rail
Sun TV News-- Oil will be shipped by rail if not pipelines: Natural Resources Minister
Vancouver Observer--  Gateway sized oil by rail project planned for Northern British Columbia, Greenpeace has learned
Vancouver Sun-- Alberta oil will reach the coast, like it or not
Vancouver Sun-- CN is considering shipping crude oil by rail from Alberta to B. C.: memo
Posted by . at 9:23 AM