Kitsault "floats" it's own LNG plan 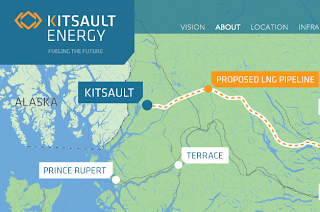 No doubt keeping an eye on all the hopeful talk of LNG terminal development in Prince Rupert and Kitimat, the abandoned mining town of Kitsault it seems would like to get in on the rush to development, offering up their own plan for a floating Terminal, calling their location the ideal location for an LNG plant.

It's not the first time that Kitsault has suggested that it has a place in the LNG sweepstakes currently rolling through the Northwest, their latest proclamation coming following the return from China of Terrace Mayor Dave Pernarowski, who is also providing his services as a Director to the proponents of the Kistault LNG plans.

Mr. Pernarowski recounted some of his recent discussions with Chinese officials, conversations that he and other Kitsault Energy officials sought out in order to line up potential investors.

While the Kitsault prospects seem to be a little late to the LNG party, Mr. Pernarowski suggests that the "floating nature of their proposal" could be on line faster than the fixed projects suggested for Prince Rupert and Kitimat.

Heralding the location of Kitsault and its proximity to the natural gas fields as key to the proposed development.

You can review some of the latest thoughts on the Kitsault proposal from this item from the Terrace Standard.

Some of our past review of Kistault proposals can be found below.

The full review of all LNG proposals for the North Coast can be found here.
Posted by . at 10:59 AM