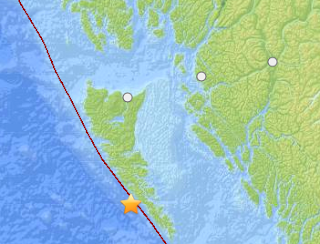 No damage has been reported from the small quake which struck   at 10:49 this morning.

No Tsunami warning was issued, nor is one expected, following the reports  of the temblor.

The Haida Gwaii fault line has been an active seismic zone since last October's major earthquake on the Islands and subsequent seismic activity in South east Alaska.

You can review all of that seismic activity from our archives.

Any media accounts of the Saturday temblor can be found below.

September 23-- QCI Observer-- Two quakes, no problems
September 20-- CFNR-- No Tsunami risk after earthquake recorded off Haida Gwaii
Posted by . at 11:29 AM