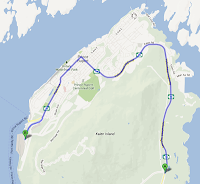 A pair of high profile truck incidents in the city over the summer, has spurred Prince Rupert City Council to seek out a meeting with both the RCMP and members of the local trucking industry.

With those two incidents still fresh in their minds, Prince Rupert City Council  revisited some of their previous concerns and  would seem to want to examine the issue further.

At the September 9th session of City Council, the Mayor suggested sending out a request for both trucking industry representatives and members of the RCMP detachment to appear at some future Council session.

The main theme of that meeting would seem to be a review of the recent incidents and to seek out more information from the RCMP and truck industry, exploring issues regarding safety on the roads when it comes to truck traffic transiting the City.

The concern over truck traffic rolling through the city's downtown core area has been a frequent topic of discussion around the Council table in the last few months, with a number of approaches considered as to how best deal with the issue.

As we outlined on the blog back in July, one suggestion was to reduce the speed limit on 2nd Avenue and Park Avenue in order to reduce the potential for further incidents. A suggestion that would be in effect, at least until the much desired truck by pass route is delivered by the Port.

That port development project would see the majority of truck traffic destined for the Fairview Container Terminal travel along the harbour south to Ridley Island. A change in the traffic pattern that would  significantly reduce the volume of traffic that currently makes the journey from Fairview to Ridley by way of the downtown and Highway 16.

Considering the recent incidents of note, that suggestion may become a key part of the dialogue should Council host its summit on traffic safety sometime in the fall.

You can review some of that discussion and the request for a meeting from the City's Video Archive, the trucking issue arrives as part of the "Mayor's Report" (from 1:16:30--1:17:30 on the Archive video)
Posted by . at 11:43 AM

Email ThisBlogThis!Share to TwitterShare to FacebookShare to Pinterest
Labels: More concerns from council over truck traffic through the city, September 2013