CNOOC the Chinese energy player that recently acquired Canadian energy company Nexen is it seems getting ready to move forward on some of their Canadian energy plans, looking to secure a spot at the Grassy Point location that has been highlighted by the province as a potential LNG Terminal development point.

In an article in the Financial Post, the Chinese owned company outlines some of its thoughts on the nature of it's interest in LNG development, both from the gas reserves that it has invested in, as well as their percolating plans on development of their own LNG terminal on the North Coast.

The key portion of the article that will no doubt catch the eye of local LNG enthusiasts is the opening line, a positioning statement which offers up that "Nexen is considering it's own liquefied natural gas project on the West Coast".

The company looking to mix the some 30,000 acres of shale gas deposits that it holds in Northeastern British Columbia, with the Chinese energy giant's expertise in the transportation of natural gas. 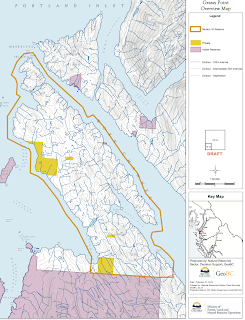 CNOCC/Nexen was shortlisted for one particular site that the Provincial Government has designated for development and now it seems they wish to move forward on securing their own site for future development.

As well, the company is investigating the prospect of partnering up with other energy industry participants regarding development of the project.

The suggestion of further interest in the Grassy Point location comes as CNOOC enters the Canadian Stock Market scene, the company began limited trading on the TSX this week, an indication for some of their interest in securing solid relations with the Canadian government after the recent approval of their takeover of Nexen back in February.

You can review that controversial period of time from our archive here.

You can review some items on other LNG developments for the North Coast in our archives.
Posted by . at 8:23 AM