Hockey season is underway in many leagues across North America and for a pair of former Prince Rupert Minor Hockey Association players 2013-14 means another season of high intensity hockey on two fronts. 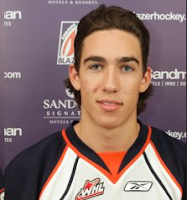 In the WHL, Devin Oakes starts the season on the right wing of the Kamloops Blazers, last season Oakes split his time between the Blazers and their developmental team the Storm,  he was called up to the main squad just in time for the Blazers playoff run last season.

As the long grind of the WHL regular season gets underway this month, Oakes has been named to the team's 25 player roster.

You can follow along with his progress in the hard hitting, top tier of junior hockey in Canada with updates available from the Blazers website.

Prince Rupert's Frank Slubowski is also ready for a new season as the Hobey Baker Award candidate from last season prepares for the new challenges offered up by an expanded NCAA conference, as his Western Michigan University Bronco's take to the ice for the 2013-14 campaign.

The path blazed by Slubowski was well documented last season (see PRMHA archive below) as he led his Bronco's through the regular season and into the NCAA playoffs, the squad falling short of a berth in the famed Frozen Four of NCAA hockey.

However, Slubowski's stellar work in the WMU nets was heralded as one of the high points for the Bronco season and many in Kalamazoo are anticipating an exciting season ahead.

WMU's media relations team provides a full and informative website on Bronco's developments, you can keep up to date on the progress of Slubowski and his team through the many updates through the season.

Any items of note on both Oakes and Slubowski that we come across during the season to come will be added to our PRMHA archives.

On the local scene, a number of PRMHA graduates are currently part of the Prince Rupert Rampage lineup, they take to the ice for the 2013-14 regular season on October 5th, when Quesnel arrives in town. 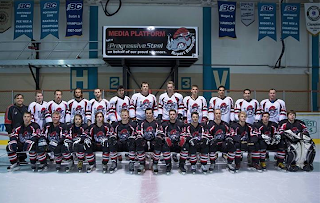 You can keep up to speed on developments from the Rampage camp from their twitter feed and facebook page, as well as with updates to our CIHL/Rampage archive page on the blog.
Posted by . at 10:02 AM

Email ThisBlogThis!Share to TwitterShare to FacebookShare to Pinterest
Labels: PRMHA players in WHL and College hockey