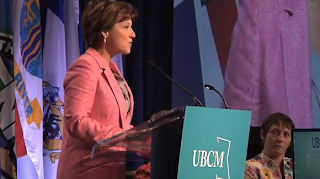 As the UBCM gathering comes to an end in Vancouver, the five days of meetings and discussions among the assembled will be but the background for the Northwest representatives in Vancouver.

Our Northwest delegation may not have made much in the way of news copy over their five day stopover in Vancouver, but developments in the Northwest seem to have been one of the themes for the final day.

With Friday providing some news on much anticipated funding for a study into infrastructure requirements in the region.

The total amount of the grants is 150,000 dollars, to be delivered amongst those communities that will be in the spotlight of LNG development, probably not quite the dollar figure that local officials might have been hoping for considering their many concerns over potential development. This funding it seems is more along the lines of seed money, to be targeted towards studies on the infrastructure needs and not in actual infrastructure development.

The prospect of high tempo growth for the region has left many representatives in the Northwest with much to discuss, particularly over how to cope with the demands on local infrastructure, highlighting such municipal concerns as water and sewer systems, roads, health, safety and social systems.

In addition to the funding announcement of Friday (see here), the Premier had previously met with Northwestern representatives in a separate session, to explore issues and items of concern from the Northwest.

One of the main topics of that conclave was an examination of the progress of LNG in the northwest and the potential for revenue sharing deals with communities in the region.

That bit of groundwork perhaps will be the more important of the week's developments for the Northwest, recognition of the changing nature of the economy of the region and the impact that the many proposed developments may have on it.

The Premier used the prospect of the development of LNG in the Northwest, making it a key portion of her keynote address to the UBCM, the Premier's speech the final of the major events of the five day convention of municipal and provincial officials.

Some of the reviews on the Premier's talking points of Friday can be found below, not surprisingly the Vancouver based media for the most part was focused on the Massey Tunnel announcement.

And while the work of the Northwest delegates at UBCM was rather low on the media radar, there were discussions and resolutions considered at the five day conference.

You can review some of the background on the UBCM week that was from our UBCM talking points archive.

The next UBCM gathering is scheduled for Whistler next September 22-26th.
Posted by . at 8:50 AM