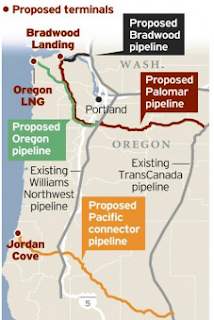 Two Oregon companies are putting forward proposals to build LNG shipment terminals, looking to join the growing list of export facilities, but in the case of the Oregon proposals, providing a bit of a twist on the business models being proposed for the North Coast of British Columbia.

Both of the proposed Oregon projects hope to tap into the Canadian Natural Gas markets and provide an answer for those small and middle sized Canadian companies looking to find a way to get their gas to world markets.

They are designed to service those Canadian companies that, unlike the larger players in the industry (including the ones staking out turf on the North Coast) may not have the financial resources to develop their own export terminals.

The two proposed terminals would be smaller in scope than the large scale developments proposed by the large Global energy companies for the Kitimat and Prince Rupert regions. You can review some of those North Coast proposals from our LNG archive page.

Both proposals are still subject to a number of regulatory and environmental examinations. There has been significant opposition expressed by a number of Oregon residents regarding the proposals.

The background on the two proposals can be found below

Below find some Media items on the proposed LNG developments in Oregon.