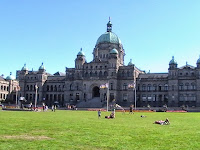 While the BC Liberals extended the suspension of proceedings of the Legislature for the foreseeable future, the work of MLA's of both parties continues on.

Though with little action in Victoria for the last month of summer, the expenses reported by our elected officials have declined significantly from the early flurry of declarations of July.

To their credit, the  BC NDP has continued on with their disclosure procedures (how long that will last under a new leader remains to be seen), posting the expense reports of their MLA's for August to their website.

Outlining what their MLA's are spending on such items as travel, accommodation and meal expenses to name a few of the items available for review.

And while the expense claims from the Northwest have dropped sharply from the numbers of July, two of the Northwest's three MLA's once again find their expenses as the top claims for August.

However, North Coast MLA Jennifer Rice won't have her claims form highlighted this time around, as Stikine MLA Doug Donaldson topped the reporting list for August, claiming expenses of 3,311.90.

At the other end of the spending scale, Skeena MLA Robin Austin, was one of some fourteen NDP MLA's who claimed no expenses for the month of review.

As for the the breakdown for the declared expenses of the North Coast MLA the totals are as follows :

The subject of expense disclosure is one that many suggest should be a required part of the Legislature process.

The review of expenses by the NDP is a welcome bit of financial review for BC taxpayers, perhaps their transparency on the financial accounts of representation could spur on the governing Liberals to provide a similar overview of the cost of representation.

You can review the full NDP disclosure from this link to the NDP website, the entries for the North Coast MLA can be found here.

Following the opening of the Legislature in June, the expense claims submitted for the first few weeks of the Legislature session provided for much discussion, as the North Coast MLA's expenses of 9,283.74 topped the debut of the NDP reports.

You can review some of that discussion from our archives.
Posted by . at 10:17 AM