A week to mingle at UBCM 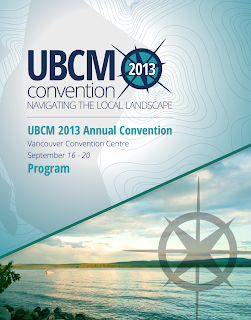 The annual trek to convention has commenced for members of Prince Rupert City Council and staff, with the route taking our elected officials and local municipal bureaucrats off to Vancouver for the annual UBCM gathering.

This year's get together is using the working title of "Navigating the Local Landscape", with municipal officials charting their course for the Vancouver Convention Centre for the week of political exchange.

Though, the travelling contingent will be at least one participant short this year, as Councillor Thorkelson previously had advised Council on July 8th, that she would be unable to attend the gathering this year, the sessions coinciding with her vacation plans.

For the most part though it will be a fairly significant contingent from Prince Rupert, Port Edward and Regional District that has made the trek south for the UBCM gathering.

For the travellers, a full week awaits, the UBCM schedule chock a block full of meetings, information sessions, displays and of course socializing.

Monday was the day for registration and settling in. Tuesday features a number of clinics, forums and sessions for participants.  Starting the pattern of events for the remainder of the week.

Among some of the key presentations in between those clinics and forums during UBCM week include:

Thursday addresses from the leader of the Opposition NDP  and from the Leader of the Green Party. Nominations (and election) for Executive positions and the UBCM annual Banquet

Friday features more of the Resolutions Sessions, an address from the Federal Government and the Grande Finale, the address by Premier Christy Clark to the UBCM gathering.

Prince Rupert City Council members have taken a list of items that they wish to see considered, one key issue of concern being the nature of environmental assessments and the burden they are providing for local government.

However, as Daybreak North's George Baker outlined as he took to twitter over the last few days, some of those hopeful talking points of the Northwest, may not actually get much in the way of discussion this time around.

Still, there will be many opportunities we imagine for the City's delegation to meet with provincial cabinet ministers, opposition MLA's and other municipal officials to explore items of interest.

And if not, there's always the UBCM Marketplace (trade show)...

We'll update our Discussion points from UBCM page as the week moves along should any items of interest be offered up for review from Vancouver.

Any items we come across can be found here.