A Boxing Day Bump in the night for Victoria 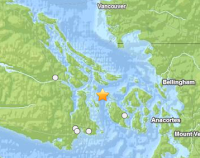 The Lower Mainland and Victoria region felt a twinge from the seismic plates on Boxing Day evening as a 3.9 magnitude earthquake rattled a few dishes and nerves around 10:30 on Wednesday night.

No damage was reported from the small temblor, which did however serve as a reminder to the more populated portion of the province that they do sit upon a major seismic zone on the Pacific rim.

Centred in the Strait of Georgia, just North of Victoria, the quake lasted about 20 seconds in some parts of the region

Reports on the Wednesday evening temblor can be found below, past events along the West coast can be found in our archives.

Email ThisBlogThis!Share to TwitterShare to FacebookShare to Pinterest
Labels: Minor earthquake near Victoria BC