Councillors Thorkelson and Rice with the LNG cross examination 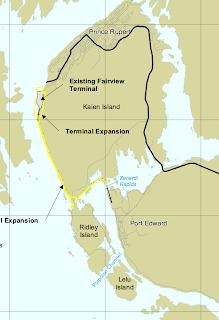 The changing nature of the industrial base for the North Coast, seems to be dividing the region into the pro-development and re-think development camps, with Councillors Rice and Thorkelson for the most part seemingly in the re-think it camp.

That much at least seemed evident at the most recent City Council session where there were twin presentations from two of the proponents of LNG development for the North Coast.

Both Petronas and Spectra Gas appeared in front of Council on December 10th, sharing the latest details and time lines of their plans for the region.

Petronas the Malaysian Energy giant recently announced it's desire to construct and operate an LNG shipment terminal on Lelu Island, a much talked about project that would create jobs both during the construction and operational phases.

Spectra Gas is putting forward it's plan to construct a pipeline from the Northeast gas fields of British Columbia to a terminal to be constructed near Prince Rupert by the BG group, which previously appeared in front of Council to outline their terminal plans, a project which would be different from the proposed Petronas project.

Before all of that development gets moving however there will be any number of public consultations, environmental reviews and such and to give the folks at Petronas a heads up on that path, Councillor Thorkelson was quick to the microphone to ask a few questions of the Malaysian company representative, suggesting at one point, that she didn't believe that the Petronas' proposal as outlined to council would survive the process ahead of it.

Councillor Rice, who currently is campaigning for the NDP nomination for the North Coast, offered up her thoughts to the Spectra representative, post presentation. Asking a number of questions regarding the planned routes to Prince Rupert and the impact that they may have on the environment, as well as Spectra's experience in such matters. She was joined at one point by Councillor Ashley, who also inquired about the path of the pipeline and some of the obstacles of nature that it may face.

Of the night's presentations however, Councillor Thorkelson seemed the most skeptical of the Petronas plan, repeatedly asking if the company had given thought to other locations for a terminal, particularly locations to the north of Prince Rupert, expressing her belief that the present location of Lelu Island would be a problematic thing, owing to its location in the Skeena estuary and the impact it may have on the environment there.

Petronas didn't offer many further details for her on the nature of their site selection, however the Councillor's suggestion of alternative sites doesn't seem to be on their horizon any time in the future, with Petronas clearly expressing a preference for the Lelu Island option.

The less strident interest by Councillors Rice and Ashley in the Spectra Gas pipeline proposal can also be found on the City Video archive, starting at 29 minutes,  while the Councillors take to the microphone at 43 minutes or so.

Further along in the council session and in matters unrelated to LNG development, Councillor Thorkelson seemed to grow frustrated with the tone of the discussion on the topic of civic finances, particularly in the fallout of the tabling of the Police station issue.

Offering up a rather tongue in cheek thought, steeped seemingly from the end of a very lengthy council session, that the city will be in a better financial shape when "all those LNG plants are pouring money into our pockets."

A statement that seems just a tad on the downhill side of sarcasm.

The timeline of her frustrated aside can be found at the 2 hour 23 minute mark.

The tone of the recent debate at Council about a variety of development proposals from the Pinnacle Pellet Plant,  the Container Port Expansion  and on now to the recent questioning of the LNG proponents, would appear to suggest that some on Council are perhaps feeling a little marginalized when it comes to all of the development plans being bounced around the region of late.

And while they haven't declared publicly their thoughts, one way or the other, on the fast moving wave of development options for the region.

It would seem that some on Council at least, are not quite as enamoured of the handling of some of these proposed developments on the waterfront, as many of the residents of the city may be.

Email ThisBlogThis!Share to TwitterShare to FacebookShare to Pinterest
Labels: Council's many concerns over waterfront development