Anyone seen the CEO?

An interesting change on the CityWest website, one that suggests that perhaps change has again taken place at the local telephone and cablevision provider.

If one takes a quick look at the Management page of the CityWest website, you'll find that the Chief Executive Officer of the Company, Bill Craig, no longer seems to have a presence on the page (nor a title), an interesting disappearance from the listings of the top management team at CityWest. 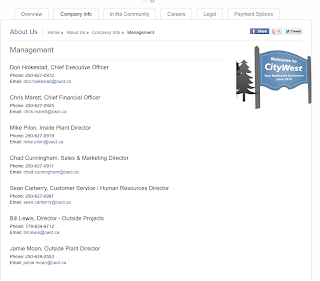 Instead, Don Holkestad is now listed as CEO, leaving us to wonder where Mr. Craig fits into the picture, if indeed he does anymore.

He joined CityWest a little over a year ago, arriving with an impressive resume in communications with stops in Toronto and Bermuda to name a few past destinations. There was much talk of change in his introduction to the community with a declaration that with a fresh set of eyes, that some of the disorganization that he found might be cleared up,

The impression at the time that he, as the CEO was looking forward with  the company, perhaps looking at new ways to provide service to the community.

That was in June of 2011 and now with just over a year of his direction, it would seem, if the augurs are correct, that his voice isn't the one holding the Board of Directors interest anymore.

When we last heard from Mr. Craig at the October 22nd City Council Session.  He was part of the CityWest delegation at City Council delivering the annual address, a rather easy going affair for the CityWest team, as City Council's members had few questions of substance on anything resembling financial matters.

Instead, on that evening, Council concerned themselves with the more pedestrian of items such as a wish for better cel phone connections on Highway 16 to Terrace, questions on whether e billing was to soon be made available and a wish for better bandwidth for local gaming enthusiasts.

Talk of such things as the dividend that City is supposed to receive from CityWest, or expenses related to the expansion towards the east, or indeed anything to do with financials, apparently were for a different venue or time.

Not even the topic of the recently settled labour dispute came up for discussion, leaving the public uninformed as to the terms of the resolution of that dispute and at what cost to the taxpayer.

We offered up some background on that appearance in a past North Coast Review item and if the City ever updates their City Council archives for that session on their video and audio offerings, you could take in the report yourself from the City's Archive pages.

Should the October 22nd council session ever be posted to those portals, the CityWest segment starts around the 1 hour 14 minute section.

For a company with a rather ambitious expansion plan, City Councillors who we gather are supposed to represent the city's taxpayers as our proxy as shareholders, had few questions that might reveal where the company is, what its future portends and if we are receiving a decent return on our investment.

That is what makes the missing marquee player on the management page an interesting item of absence.

From the bold declaration of a year ago of changing some of the culture at CityWest, to banishment from the website, seems like an indication that maybe not everyone was on the same page as Mr. Craig.

CityWest always seems to operate with a bit of mystery for the local populace, a conundrum of a company that while in the world of communications, rarely actually communicates very well with its customers/shareholders.

Hopefully, when Council returns in the New Year, we will learn a bit more about what may be going on down on Third Avenue West.

If there has been a City West Shuffle, what were the reasons behind it and where is the company  heading towards from here?

Providing the public with a bit of background on developments and if there are any additional expenses coming our way, would be some helpful background for the shareholders/taxpayers.

Even better would be the prospect of some actual communication with us, as to what yet another change in direction for the company may mean for the future..

We have a number of items on past events at CityWest available for review in our archives section, it may shortly require an update though, if the missing placeholder on the CityWest website is any indication.

Update: Some interesting observations on the subject, touching on a few of the same points above and expanding on others, can be found through this posting on the local online forum htmf. A posting that no doubt will allow for a lively debate on what seems at times as the number one discussion topic for the city's population.

Email ThisBlogThis!Share to TwitterShare to FacebookShare to Pinterest
Labels: CityWest changes on their management team?