He's got Jack's back 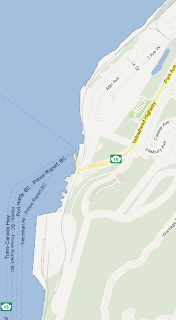 In the ongoing debate over the development of waterfront lands on the West side of the city, Mayor Jack Mussallem can count Brian Denton as on his side.

Monday night's agenda package for city council featured a lengthy letter of support for the Mayor stemming from his and Council's recent letter to the Prince Rupert Port Authority, a correspondence that proclaimed much disappointment in the handling of waterfront issues by the Port related to the community.

In that, it would seem that Mr. Denton is in simpatico with the elected officials who affixed their names to the letter to the Port.

To add to that support, Mr. Denton has composed his own correspondence, destined for the Northern View (though he has fears that the local paper may not publish it) documenting some history on Port Development in the city, as well as highlighting a number of concerns and issues on current development plans as he sees them.

Thanking the Mayor for his leadership on the important subject, Mr. Denton goes on to list a number of his talking points, a good number of which seem to be along the lines of those shared by Mayor and council.

Among the many, many concerns listed,  these are some of the key issues.

Concerns over the Pellet Plant development and the Air Quality and Noise issues raised previous.

Reports of declining home values in the affected section of the city.

Threat of fire/and or explosions from the Pinnacle development.

Questions over the environmental review of the project as conducted by the PRPA.

Questions over CN honouring its obligations to implement an idle shut down policy, concerns over any kind of noise management plan from the Port and questions over how the Port handles complaints from the public over issues from the waterfront.

Calling into question the planned expansion northwards, which in Mr. Denton's opinion will add to the existing problems in the Fairview region from container traffic

The lengthy letter, six pages in total, which if published most likely will be edited for brevity, can be found as one of the first submissions in the Items for Council section of the City Council pages. (see here).

It's well worth a read, providing a bit of background on some of the complaints from residents on the West side of the city, who are feeling a little dis-enfranchised of late. Mr. Denton seemingly ready to take the lead from the West side in the ongoing debate with the Prince Rupert Port Authority over waterfront development.

Give yourself some time to work your way through the correspondence, there is quite a bit to review, or wait for the Coles Notes version to make its way (if it does) to the local paper.

You can find further background on the topic of Industrial Development on the Prince Rupert Waterfront from our archive section.
Posted by . at 9:07 AM

Email ThisBlogThis!Share to TwitterShare to FacebookShare to Pinterest
Labels: West side concerns on Port Development brought to Council