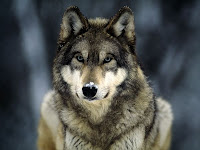 The latest spurt of discussion on the topic partly owing to a police incident of last week and now with word that Conservation Officers have arrived in the city and already dealt with one particular troublesome one.

Emotions boiled over a last week in the wake of a police officer shooting a household pet, a mixed dog/wolf that had apparently escaped the house late into the evening and chased some deer through the McClymont park area.

Clearly a tragic case for the pet owners and for the officer involved, though in the current atmosphere of concern over wolves in the area, it's not hard to understand how such a terrible occurrence could happen.

The dog which had the appearance of a wolf, was running unleashed and deemed a threat by police. In the current atmosphere, with a segment of the population demanding that something be done about the "wolf problem", things like this are perhaps inevitable.

With the volume of sightings reported to both the RCMP and Conservation BC, a Conservation Officer arrived this week to take stock of the situation and deal with the issue.

Residents in a number of areas of the city had called the Conservation Department to complain of the volume of wolf sightings in the city, with the largest number of complaints coming from the east side of the city, along 6th, 7th and 11th Avenue East.

It was reported on Wednesday, that the Conservation Officer shot a wolf in the Park Avenue Area, he believes that it was the one wolf that seemed the most habituated in the area and hopes that the number of interactions between residents and wolves will now be reduced.

There are many reasons for the seemingly growing wolf population in the region, a large deer population, a feral cat problem that for the moment isn't going to be solved in any tangible way and even more than a few local residents who inexplicably leave food outside for wild animals.

All go to add to the problems. All seem to build on the anxiety that appears to arrive on our doorstep each year around this time.

Some of the solutions are actually within control of the city's residents, nature will most likely take care of the rest.