First reminder of winter arrives on the North Coast 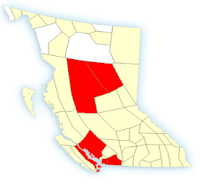 While Prince Rupert had its first taste of winter this morning, locally the precipitation that fell as snow was for the most part not that troublesome, with little in the way of accumulation and that which did stick had mostly melted away by early afternoon.

However, further inland, the first real blast of winter that Prince Rupert woke up to has provided for Winter driving conditions on Highway 16 from Smithers eastward.

Environment Canada had issued a Heavy Snowfall warning at 9:30 this morning for the Bulkley Valley, Lakes and Williston Districts, with an anticipated 10 to 15 cm of snow expected through the day.

Later in the day however, that warning was amended to be in effect in only the Williston area.

For Prince Rupert, the current conditions will remain constant for the next week, with rain showers occasionally morphing into snow flurries and then back to rain as the temperature changes through the day. 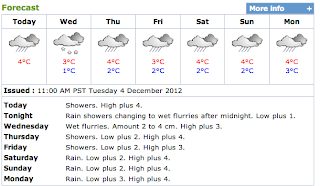 Any changes to the forecast can be found at the Environment Canada website, while road conditions across the Northwest can be reviewed from the Drive BC website
Posted by . at 1:34 PM

Email ThisBlogThis!Share to TwitterShare to FacebookShare to Pinterest
Labels: First snowfall for Prince Rupert for winter 2012-13