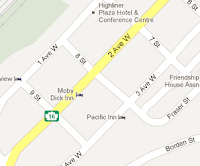 A Sunday evening incident between a vehicle and a pedestrian on Third Avenue West has resulted in the death of the pedestrian, who succumbed to injuries at Prince Rupert Regional Hospital.

The Prince Rupert RCMP and Emergency Responders attended to the incident on the 800 block of Third Avenue Sunday at 6:10 PM, when a westbound vehicle collided with the pedestrian travelling southbound through the intersection.

As a result of that incident, the pedestrian sustained major injuries, was transported to Prince Rupert Hospital and sadly, later passed away.

Poor visibility and weather conditions are being investigated as contributing factors in the collision, while speed and alcohol reportedly did not play any role in the events.

The investigation into the incident continues and the RCMP ask that anyone with further information on it to contact them at the local Detachment at 250-627-0700.

As most motorists and pedestrians know, the winter months in particular offer up challenges and dangers, with less daylight hours, combined with inclement weather conditions offering up cause to be attentive, particularly in the intersections throughout the city.

Caution on the behalf of both motorists and pedestrians is of key importance throughout the year, but never more so than in the winter months.

The Northern View received an update on the Sunday evening incident from the Local detachment of the RCMP.
Posted by . at 1:18 PM