Ridley Terminals is Back on the auction block...

Like a homeowner who has made a few renovations and spruced up the property a bit, the Federal Government is apparently ready to part company with its investment in Ridley Terminals Incorporated.

With a few years having gone by now from when the Conservatives took power and made for a reset on the Ridley Terminals prospectus, they are now ready to see who may want to pop by and check out the place, take in the view and maybe put in an offer. 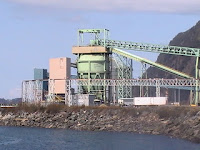 The Conservative Government of Stephen Harper announced this week that the marine terminal on Ridley Island is now officially For Sale, with provisions of open access apparently the one caveat between vendor and buyer.

In their press release of December 13th, the background on the proposed sale included the apparent main point of the Government in its quest to divest itself of its ownership stake in the Terminal.

“Moving away from public ownership of Ridley Terminals would align it with other major marine terminals in Canada, which are owned and operated by private companies,” said the Honourable Steven Fletcher, Minister of State (Transport). “Our Government will seek the best value from a buyer that will operate Ridley Terminals with open access on a long-term, sustainable basis.”

The decision to put Ridley Terminals on the market, seems to be an example of the Governments plans to Review all of their Corporate Assets, in this case a high profile marine terminal with a steady supply of product to be shipped worldwide.

It's not the first time that Ridley Terminals has been found in the Buy and Sell listings of wherever major corporations and infrastructure find themselves, a few years back during the Liberal years, the coal terminal was destined for sale, at the time thought to be to Coal Industry interests, but with the change from Liberal to Conservative government that prospectus was closed, the property taken off the market.

In the period since that first attempt at a sale, we've seen a new chairman (farewell Daniel Veniez, hello Bud Smith)  witnessed a rather vigorous expansion plan put in place and heard tale of increased shipments through the Port of Prince Rupert.

With all of that in place, the time it seems is nigh for privatization, the Conservatives apparently of the opinion that the nation has no business, in the business of coal transportation and shipment.

The prospect of a potential sale of Ridley has once again brought into focus the issue of infrastructure and who should have access to and control of the operations on the north coast.

One concern is that the Conservatives may be inclined to sell it of to foreign interests, a vital cog in the transportation network to be shopped off to the highest bidder, whether Canadian or not.

Others are concerned that if put into the hands of the coal industry, the Terminal may become more or less a closed shop to only those companies that have invested in the project, leaving smaller or competing coal companies without access to a shipment point.

Those, as well as any number of other concerns  are of course issues that the Federal Government will have to address, both the local NDP MP, Nathan Cullen as well as the outgoing NDP MLA, Gary Coons were less than impressed with this weeks announcement.

"They're broke. Frankly they are running huge deficits. My only worry is that they are doing this more out of desperation to balance the books rather than this is a smart thing to do right now."-- NDP MP, Nathan Cullen

“It is a bit of a shocking, surprising announcement. RTI has been a key part of our community for many years and is making money hand over foot, so on one hand it seems a bit weird to sell an asset that is making money,” he said. “You would think that if something was making profit you would keep it under your wing... I guess the devil is in the details, and all we have now is a 10 minutes press conference.”-- NDP MLA, Gary Coons

The last time that the prospect of a privatization of Ridley Terminals came forward, the reaction was quick from the not only the MLA and MP, but from Mayors across the Northern part of the province, as well as from the Mayor and Council of the City of Prince Rupert.

With much concern at the time expressed over the impact, (on the industry and the North Coast) that such a development might have. It will be interesting to see if the last three years have provided for a changing of opinion as Ridley once again goes into the Federal For Sale Inventory.

There was no timeline provided by the Government on Thursday as to when they anticipate any deal to close, though we imagine. that even with the requirement of access that the Government states is a deal breaker, that there will be more than a few competitive bids submitted for consideration to the Canada Investment Development Corporation.

One thing seems certain, we most likely will hear from Dan Veniez at some point in the process, having been inclined to see the Terminal put in private hands at one time, the prospect of the Terminal finally being put into that position is surely something that won't slip under his radar over the course of the next few months.

For those looking for more background on Ridley Terminals, we have a full review in our Industrial Development Archives.

Updates: Some interesting reviews of the Federal Government's decision in the days following the announcement.

Huffington Post-- How the Government Dethroned a Crown Corporation
Globe and Mail-- Ridley Terminals a lesson for market-interfering governments
Posted by . at 3:52 PM

Email ThisBlogThis!Share to TwitterShare to FacebookShare to Pinterest
Labels: December 2012, Ridley Terminals back on the market