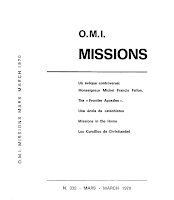 With John Furlong taking his concerns over an article from the Georgia Straight and writer Laura Robinson towards the courts, the background of his time in Northwestern British Columbia and Burns Lake in particular, is finding much room of late in newspapers and on radio and television news programs.

The latest review of what brought Furlong and hundreds of others to Northern British Columbia can be found in the Vancouver Sun, which devotes a good portion of space in an article this weekend to examine the past of the Frontier Apostle program, the creation of then Bishop O'Grady of the Diocese of Prince George.

During its time, the program brought over 700 lay staff from other countries to a number of Catholic Schools from Prince George to Prince Rupert, a process that for the most part came to an end, once the government began to provide partial funding for Independent Schools in the province.

Annunciation School, was one of many across the northwest which featured the Frontier Apostle program through the sixties and into the seventies.

The program that O'Grady launched had a lengthy and for the most part well received history in the region and with it, at times, some controversy as well.

Some of which is getting a second look, through the renewed interest in the program's past. All be it, as the backdrop of the Furlong story and the aspect of corporal punishment, a form of discipline that was allowed and in place in all British Columbia schools of that era.

The most recent review from the Vancouver Sun, which provides a fairly interesting glimpse of the Frontier Apostle program, can be found here.

Some past items of note on both the Furlong/Georgia Straight story and the Frontier Apostles can be found below.

Email ThisBlogThis!Share to TwitterShare to FacebookShare to Pinterest
Labels: Frontier Apostles of the Northwest