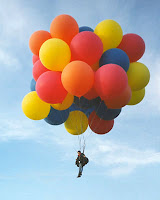 Mayor Jack Mussallem has been rather busy the last few days, offering up a few trial balloons at how best to reduce the cost of doing business for the City of Prince Rupert.

Among some of the financial thoughts put forward from City Hall include a roll back on property exemptions to community organizations  and the sale of a pair of costly items on the city's books of late, the Prince Rupert Airport Ferry and the City run golf course.

With the Mayor and his council perhaps starting to hear some of the discontent over the city's tax rate, he has recycled some ideas from past administrations, perhaps thinking that the time is now nigh to move forward on them.

The tax exemption program would reduce the exemption to those community groups by 40 percent over two years with a start date in 2013. Those groups will have to find the money to cover those increases, a burden that may be hard to accomplish in challenging economic times.

The potential sale of the Golf Course and the Airport Ferry have been talking points for a number of years, though progress on those files never seems to amount to much.

While the Golf Course may perhaps find a collective group seeking to take ownership, there are some who suggest that the finding a buyer for the Airport Ferry may be a little more ambitious for the city.

The most likely candidate for that file, at least as far as the city is inclined would be the Port of Prince Rupert, though a recent press reports didn't seem to suggest that the concept of a Port takeover has moved much beyond pre dinner conversations at local functions.

While the City may seem anxious to get those discussions into a more formal setting,  it remains to be seen if the Port is on the same timeline for a handover as the Mayor.

Interestingly enough, in the Mayor's laundry list of potential off loading, the always contentious prospect of selling the City owned telephone and cable operation CityWest didn't seem to make the short list this time.

Discussion on the future for CityWest it seems remains a non starter for the members of the Council and any talk of removing it from city ownership never seems to gain much traction.