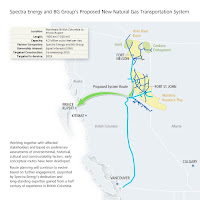 Yet another Natural Gas pipeline project has been announced for the Northwest, with Spectra Gas in partnership with BG Group LNG terminal providing the details that would provide for a natural gas pipeline, running from the northeastern British Columbia gas fields to a terminal planned for Prince Rupert.

The Spectra/BG Group announcement of September 10th marks the second such announcement in recent months, with Malaysian energy giant Petronas having outlined its plans for the north coast over the course of the summer, which would see its own LNG Terminal in place to serve the markets of Asia.

The cost and operation of the pipeline announced by Spectra and the BG Group would be split fifty / fifty between the two companies and would be capable of carrying up to 4.2 billion cubic feet of gas per day to the proposed Prince Rupert Terminal.

And while the two companies thump the tub for LNG development in Prince Rupert, there are some that offer up a cautionary tone that the prospect of a line to Prince Rupert and Terminal is still very much in the conceptual stage.

With an Alberta based oil and gas publication suggesting that the partnership is planning a route over a section of British Columbia already dismissed by others as far to costly to work in.

The article outlines the thoughts of Enbrige and other users in the Kitimat area who in the course of their own developments took a pass on any plans to run a pipeline along the Skeena range towards Prince Rupert.

Whether that's just a competitive rebuttal from the folks at the various Kitimat projects or an actual wrench into the plans most likely won't be developed for years down the line, still it shows just how hot the development of LNG properties in the Northwest has become over the last few years.

Not to mention the rivalry it seems to be creating between port facilities in Prince Rupert and Kitimat.

Some background on the latest announcement from Spectra and BG can be found below.