"PRPA acknowledges the feedback and concerns expressed by some local residents regarding land use management in the inner harbour adjacent to CN's downtown railyard,... However, we believe we can strike a balance between creating the economic opportunity a growing port represents and enhancing the livability of Prince Rupert through improvements to public access to the waterfront."--The Port of Prince Rupert's Director of Public Affairs Ken Veldman, outlining the Port's position on moving forward with the Pinnacle Pellet Plant proposal.

The Pinnacle Pellet Plant, the much discussed project for Prince Rupert's waterfront has cleared its first major hurdle, with the announcement last week that the Prince Rupert Port Authority had approved the Westview Terminal Redevelopment Project. 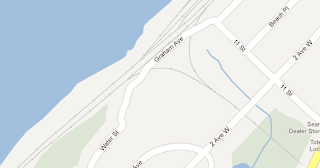 Better known to Rupertites as the Pinnacle Pellet Plant Project, the Renewable Energy company based out of Quesnel will create a storage and shipment facility at the old Westview Grain Elevator site on Prince Rupert's waterfront, located midway between the current container port and the Kwinitsa Station/Waterfront Park area.

The proposal, galvanized a segment of West side residents who expressed their opposition to the plans both to the Port and the City of Prince Rupert, through petitions, a website and appearances at public functions.

The Port Authority made a nod towards those concerns in their press release of Friday.

However by their announcement moving the project forward, the Port it would seem feels that they have addressed those issues, publishing the findings of the environmental assessment to their website for further examination.

Among the recommendations of the environmental assessment were commitments to Air Quality and Noise, with conditions and remediation to be put in place governing those two key issues of concern.

Air Quality: Pinnacle will be required to carry out continuous air quality monitoring by qualified environmental monitors throughout construction, operation and potential decommissioning of the project. Pinnacle will work with the BC Ministry of Environment to develop a plan that will achieve the required monitoring, ensure adherence to current regulatory standards, and determine corrective steps to be taken in the event that limits are exceeded.

Noise: Pinnacle will be required to carry out continuous noise monitoring during terminal operations. Furthermore a plan will be designed to confirm the accuracy of the Baseline Noise Assessment, confirm that the proposed noise mitigation measures are effective, and determine corrective steps to be taken in the event that limits are exceeded.

Upon completion, the Terminal will have represented a capital investment estimated at 42 million dollars in the Prince Rupert region, provide for over 90,000 hours of construction work and created up to 24 new direct jobs in terminal operations, as well as contribute to the municipal tax base.

Other items on the latest developments: