Canada Post has major changes in store for mail service 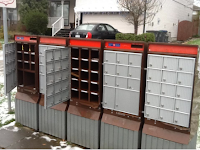 Last weeks announcement of a five year plan to bring to an end door to door delivery of mail across Canada continues to make for much discussion from coast to coast to coast.

Many Canadians had probably resigned themselves to the prospect of reduced frequency of delivery from the current five day a week model to something along the lines of twice a week, but what appears to be the thermo nuclear model of wiping out the entire delivery program caught most by surprise.

Calling their program of change a Five Point Action plan, Canada Post highlighted the nature of the changes ahead through a variety of media portals. (You can review the five points from their media release of December 11th)
.
.
While the plan touches on such things as more convenience by way of postal franchises and the need to streamline operations and control labour costs. For most Canadians the most important portions of "the plan" it seems will be another postal increase that is on the way and the increased use of the Community Mail Box program that currently can be found in many communities, particularly in newer subdivisions (a program which hasn't really had much cause to be implemented in Prince Rupert owing to the lack of new housing)

For many Canadians that now is the only delivery system that they know of, so the comments from those that still receive the personal touch of door to door delivery hasn't resonated very loud for them.

It's probably that theme that the federal Conservatives are counting on, as they move forward with the Canada Post home delivery changes.

The first thing they will have to do however to gain the confidence of Canadians is to prove that those Community Mailboxes are a safer alternative to the door to door program in place at the moment, the main opponents of the giant mail storage units point to their vulnerable nature for mail thieves and the opportunity that they provide for a quick smash and grab.

That appears to be one of the themes that opponents of the government's decision will be using as they ramp up their criticism of the plan.

CUPW the union that represents the majority of Canada's Postal workers was quick to outline their concerns over the proposed five year plan, offering up three key notes of opposition to the project as outlined by Canada Post.

For its part, other than the initial announcement of December 11th, the Post Office hasn't really rolled out much in the way of actual details on the program.  Leaving many to wonder just what they have planned or the timeline for communities in the Northwest as to when they will no longer see a letter carrier coming up the walkway.

Five years is a long time to implement a program, particularly with a Federal election arriving before that program will be rooted in place, so last week's announcement may yet find a bit of revision before it becomes a full and irreversible fixture.

Change it would seem is coming to the Post Office, how fast that change moves will depend on political will and how it is received by those that use the service.

The prospect of that change for the mail service has engaged Canadians like few topics of late, Monday morning the topic was addressed on the Bill Good program on CKNW.

The wide range of opinions highlights the split among Canadians on just what the future of the post office should be, you can listen in to that conversation through their Audio Vault Archive. The Post Office debate gets an airing from 11 to 11:30 AM

The topic was also the feature attraction on CBC Radio's Cross Country Check up, you can hear the Cross Canada point of view by way of the program's website.

Other reviews and items of note on the controversial proposal can be found below.

Email ThisBlogThis!Share to TwitterShare to FacebookShare to Pinterest
Labels: Canada Post has major changes in store for mail service