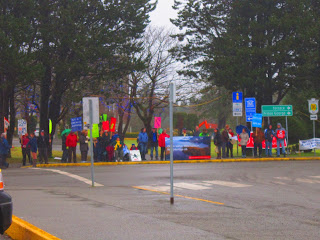 Their numbers were small, approximately thirty in number. But for those that took to the sidewalk in front of the Prince Rupert Courthouse in a cool Noon hour drizzle on Friday, the message was clear.

Thursday's announcement from the Joint Review Panel on the Northern Gateway has not changed a thing for those that oppose any thoughts of shipping raw bitumen out of the North Coast.

Prince Rupert's noon hour protest was led by UFAWU's Joy Thorkelson, who offered up many of her same points from Thursday regarding Northern Gateway and the need to bring the community together in order to make their voices heard.

Significantly smaller than some of the rallies of earlier this year during the JRP hearings in the city, Friday's protest for the most part was made up of members of UFAWU and from environmental groups in the city.

The theme of the protest that lasted a little bit over an hour or so, was that Friday was just the beginning of their efforts to send a message to the Federal Government.

As we outlined on the blog yesterday, the Joint Review Panel delivered its Final report after two and a half years of hearings on the Enbridge Northern Gateway project.

Providing a recommendation that the project move forward, but with 209 conditions that will have to be met. That report is now in the hands of the Federal Government, which has 180 days to accept or reject it, or send it back for further consideration.

The Prince Rupert protest of Friday, was the first public demonstration on that decision in the Northwest since yesterday's announcement.

You can review some of the history of the Joint Review Panel's work and the reaction to the process from  both across British Columbia and in Prince Rupert from our archive page on the theme.
Posted by . at 7:11 PM