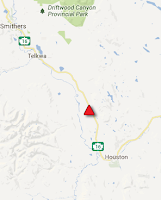 The motor vehicle incident which we outlined late last night has had tragic connections with the North Coast.

The incident which took place west of Houston, involved a Ford pick up truck and an SUV, with the result of the late Sunday night collision leaving two Prince Rupert residents pronounced dead by first responders at the scene.

The incident which took place shortly after 10 PM, had the SUV travelling westbound, reportedly lose control and  then T bone the pick up truck which was heading eastbound.

The passengers in the pick up truck were taken to Bulkley Valley District Hospital with serious, but non life threatening injuries.

Bulkley Valley RCMP officers from Smithers and Houston are conducting the investigation, the initial reports suggesting that fog and icy road conditions were factors in the incident.

The highway was closed overnight as accident investigators worked to determine the nature of the accident, reopening to travel late Monday morning.

Update: Bulkley Valley RCMP and the Coroners Service have now released the names of the couple who passed away.

Other Items on the Sunday evening incident.