Thanks for the payment, now about that waterfront access... 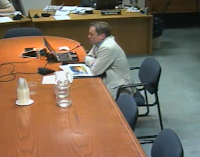 The most recent City Council session provided for something of a presentation night for the city's elected officials, a show and tell project that provided updates on a few of the projects and issues that have captured the interest of the community.

One of the first of the presentations on the night came from a group that it seems is frequently on the mind of Council, as the Prince Rupert Port authority made an appearance in front of the city's Mayor and council.

Shaun Stevenson, the VP for Trade Development and Public Affairs, represented the Port Authority last Monday providing some background on the growth that the Port has seen in the last five years and offering up some thoughts on what the future may hold as far as export potential is concerned for the PRPA.

He provided a window for Council as to how Prince Rupert is being received in Asian markets, with the profile of the city and the Port becoming more enhanced with each passing month.

Mr. Stevenson also outlined the prospect of expansion for Port operations, particularly along lands that  run alongside the Ridley Island corridor road.

On the topic of growing road traffic in Prince Rupert owing to Port developments, Mr. Stevenson explained that the concern of council is important to the Port and that a solution is still in the planning phase.

He provided for a new twist on that theme, advising that one alternative to the road bypass option of late, may be to move containers from Fairview Terminals to Ridley and Watson Islands by way of rail.

The theme of improving communications with the community was reviewed as part of his presentation, as he highlighted the recently introduced community dialogue format that the Port has initiated.

When the Mayor turned to Council to ask questions of the port, a few of the members of Council offered up their thanks for the recent interim payment from the Port to the City regarding the in lieu of taxation process. Though there was also an acknowledgement that the process is still moving forward towards a resolution for the new year.

For a few councillors however, there were  other issues that they had concerns about. Towards those themes, Council took the opportunity last Monday to share those concerns with the Ports representative.

Taking advantage of Mr. Stevenson's appearance in Council Chambers, many of the City's Councillors tackled the ongoing issue over waterfront access in the community, in particular the latest developments with the Pinnacle Pellet Plant.

With that industrial site now in operation, the original plans of a walkway and improved access seems to have been sidetracked, much to the chagrin of Council which still would like to see some public consultation on the stretch of waterfront from Kwinitsa to what is now Pinnacle Pellet.

Councillor Ashley still has hopes that the Pinnacle Pellet walkway project as envisioned can still come to be, asking for the Port to contact CN and bring all the groups together towards development in that portion of the waterfront. A theme that Mr. Stevenson found useful, advising that the Port would pass on that message and stressing for Council that the Port is also interested in finding solutions for access to the waterfront.

With that in mind, Stevenson also updated Council on the status of the Cow Bay Development plan, advising that the plan was still intact and that the Port was looking forward to moving that project forward.

It's an ambitious undertaking which would redevelop the Cow Bay area west towards Kwinitsa. That plan would see the eastern portion of the waterfront region turned into a community focal point, the plan and vision for it can be found on the Port's website.

If that project ever gets off the drawing board, it may serve to answer some of the critics who wish to see the waterfront provide a destination spot for local residents.

The waterfront access conversation provided the city's newest Councillor Barry Cunningham to make his first comments in Council chambers. From his debut on the municipal stage, it's safe to say that at the moment, Mr. Cunningham it seems could possibly be counted among the Port's critics.

On Monday night he offered up a bit of agitation with the Port, over how he believes they engage with the community on waterfront access issues, suggesting that the Port should sit down with community groups regarding community access to the waterfront.

Referring not once, but twice to the Port's efforts on waterfront development as "window dressing", all of which made for a rather strident entrance for him into the ongoing discussions with the Port.

Mr. Cunningham's opening commentary reminds one of Councillor Thorkelson's contribution to the ongoing City/Port debate of earlier this year, when she once famously said she would like to put the boots to the Port.

All of which makes for a tone of conversation that leaves us to think that the New Year may provide us with a bounty of bombast from Council chambers when it comes to Port related topics.

For her part as part of Monday's discussion, Councillor Thorkelson said that she was pleased to see that Council was of one mind on port issues.

Though with two members of council missing from Monday's session and others at this session not providing much in way of commentary on the theme of the night,  Councillor Thorkelson's overview that all on Council are in lockstep, may not be one that is universally accepted.

Her questions for Mr. Stevenson at this session, would for the most part be taken up with concerns over environmental issues on the proposed development sites of Lelu and Ridley island.

That final talking point for the most part brought the presentation to an end.

However, judging from the nature and tone of the discussions of Monday, we imagine that it all means we will be hearing much more about the outstanding issues and concerns over waterfront development in the year ahead.

You can review the full thirty minute presentation from the City's Video Archive for December 9th, Mr. Stevenson takes to the microphone at the 2 minute thirty second mark, the review and subsequent questioning runs until the 30 minute mark.
Posted by . at 10:24 AM