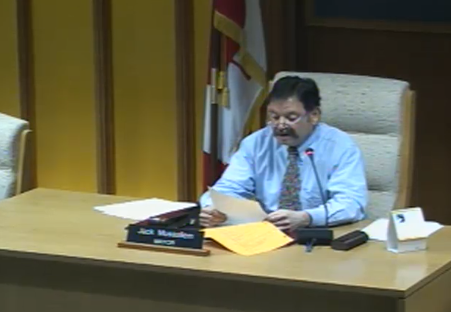 Monday's lengthy City Council meeting provided a glimpse into what the City of Prince Rupert has planned  as an answer to recently proposed ferry cuts to the North Coast.

On Monday night, Mayor Jack Mussallem outlined his recent appearance at the BC Ferries Community engagement session in Prince Rupert,  a gathering that judging by his comments, seemingly did not impress the Mayor very much.

An opinion that it would appear is shared by a large segment of the community,  made rather clear when you review the media coverage of the session.

From that meeting at the Crest, the Mayor has taken his thoughts to City Council seeking their approval in crafting a letter of concern to be delivered to Premier Christy Clark.

A correspondence which will invite the Premier to meet with Prince Rupert council and other communities of the North Coast to discuss the Ferries decision.

The hope it seems is to provide her with a better understanding of how those changes will have negative impacts on the many aspects of life in coastal communities of the North Coast.

The Mayor, as part of his Mayor's report for the evening offered up a wide ranging review of the provincial decision, outlining his disappointment in the nature of the proposed cuts, particularly considering the anticipated change of direction for the local economy over the next few years.

He observed the nature of improving roads infrastructure in other regions of the province, taking place at the same time as the province makes plans to reduce the transportation services of the north coast.

He also made note that the province has recently received a fairly sizable financial return from the LNG interest in the region and he observed that making cuts to services in the region from which they are receiving that financial boost from is something of concern.

You can review the talking points of the Mayor and Council from the City's Video Archive for the Monday, December 9th session.

From it, you will learn the concerns of other members of council and how they plan to frame their letter to the Premier seeking a change of course when it comes to the province's plans for BC Ferries.

The Mayor's discussion points arrive at the 2 hour 51 minute mark.

You can learn more background information on the changes announced last month from our blog item of last month.

More items of note on BC Ferries issues can be found on our Transportation Archive page
Posted by . at 10:40 AM

Email ThisBlogThis!Share to TwitterShare to FacebookShare to Pinterest
Labels: Prince Rupert Council formulates its response to BC Ferries cuts