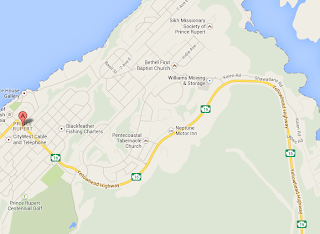 As we outlined on the blog back in May, the BCAA conducts an annual survey, looking for feedback from members and the public at large as to which roads in the province are the worst, whether it be a state of dis-repair or congestion.

The data collected outlined the top ten worst roads in the province, the closest to the North coast being in Kamloops.

Clearly the work for BCAA was not particularly scientific and perhaps indicative more of low BCAA membership numbers in the city, as only 6 people voted in the road referendum if you will, adding three Prince Rupert locations to the 581 spots across the province listed as particularly bad.

Mr. Pucci was quick to point out to Council (most likely to their relief) that two of the three locations listed are the responsibility of the Ministry of Highways, which according to Mr. Pucci has already taken care of the repairs on those locations.

Kaien road is the responsibility of the City and he advised council that Public Works department provides it with particular attention owing to the heavy use of truck traffic that travels along it.

You can review his notes for Council here. For those that travel further afield in Northern British Columbia, he also provided a listing of the worst roads in other communities, with Prince George leading the parade when it comes to pothole concerns of all the submitted roads of the north.
Posted by . at 10:58 AM