As a regulatory tribunal, our role was to conduct a fair and accessible process that allowed those who participated to be respected and to have their views taken seriously. The ultimate purpose was to obtain the most accurate information available on all aspects of a proposed project. Our task was to design and implement a rigorous process that would result in recommendations to the Governor in Council based on a thorough and independent analysis of all aspects of the project.--- Final Portion of the conclusion from the Joint Review Panel Report into the Enbridge Northern Gateway Pipeline Project, Delivered December 19th, 2013.


After close to two and half years of study, the Final Report of  the Joint Review Panel on the Northern Gateway Pipeline was delivered on Thursday. Released through the Calgary offices of the National Energy Board, the document offers up two volumes of findings for Federal Government review.

The result of their work brings forward an extensive collection of material, evidence and comment, the first portion providing some background on their journey across Alberta and British Columbia, part of  a volume known as Connections.

The second, a volume called Considerations, provides a more detailed account of the panels work on consultations, steeped in the many items of note raised during the lengthy hearing process. 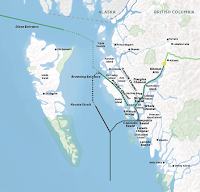 Those were the destination pages for most reviewers of yesterdays release, the takeaway portion of the document where the 209 conditions can be found.

They are the key points which will have to be met by Enbridge, in order to move forward their plan to transit Alberta bitumen to a shipping terminal to be built in Kitimat, British Columbia.

As the press conference outlining the release of the report was taking place, the clock was started on the Federal response to the report.

In effect providing the Conservative government of Stephen Harper 180 days to accept the report, reject it, or return it seeking change.

Still to be heard as well, Premier Christy Clark and the BC Liberal caucus on whether Enbridge will meet the Liberal's much discussed "five conditions".  That conversation perhaps will have to wait for another day, while all await the delivery of the Federal intentions regarding the JRP document.

For now, the review is in, the decision rendered and the debate, well the debate will carry on.

Reaction to the decision has been collected from the national media

And from across the Northwest

On the Northwest political front, the delivery of the JRP's decision Thursday has provided for no shortage of reaction from any number of political types in the Northwest.

Among them was NDP MLA Jennifer Rice, who was quick to her twitter feed yesterday, expressing her fears for democracy, just ten minutes after the decision was announced.

Not to be outdone on the theme of political will, was the resolve of Skeena-Bulkley Valley NDP MP Nathan Cullen.

He issued a statement shortly following the announcement, advising that  he and those who follow his political beliefs "will continue to refuse Mr. Harper's vision for Canada as a northern petro-state..."

Prince Rupert City Councillor and UFAWU representative Joy Thorkelson, was perhaps the most outspoken of all of Thursday's commentators. Providing a wide range of talking points from outside of the Fisherman's Hall in downtown Prince Rupert on Thursday.

Stating that the decision of Thursday "is not in the interests of Canada to have this pipeline, that its the interests of a few wealthy people, the one precent ( and that) the First Nations and the workers are going to unite to prevent this from going ahead."

Theirs were among some of the most colourful of political comment on the day, setting the tone for what many expect will be some rancorous debate, both in Victoria and in Ottawa.

Rather than an end to the process,  Thursday's announcement, much like the run up to it that we outlined Wednesday on the blog, is but the prologue to what is shaping up to be a very lengthy Opera of the North.

While Enbridge reviews the 209 conditions and awaits further instruction from the Federal Government, lawyers for those opposing the pipeline project will no doubt be working on the large volume of court challenges expected to come along the way now that Thursday's decision has been delivered. 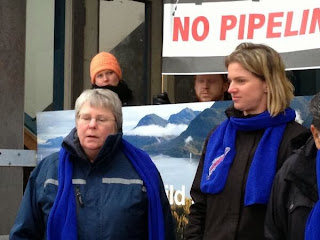 One of the first public displays of opposition is set to come Friday in Prince Rupert.

Local members of UFAWU led by Joy Thorkelson, along with MLA Rice are expected to be joined by others in opposition to the project, all taking part in the protest rally set for the Noon hour at the Prince Rupert Court House.

An indication, that we haven't heard the last on the topic, with much, much more on the theme in the months and more than likely, the years to come.
Posted by . at 5:27 PM