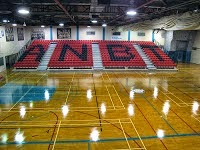 The 57th Annual All Native Basketball Tournament came to a conclusion on Saturday night, the Four Finals of Championship Saturday putting the final touch on six days and nights of high tempo Basketball at the Jim Ciccone Civic Centre Complex.

The annual festival that combines Basketball and First Nations Culture did not disappoint, with a number of close matchups through the week providing for the difference between a shot at the Final games of Saturday, or the disappointment of coming close but not finding that one extra gear to push a team over the top.

As the week played out, by the time that the full day of basketball on Saturday was complete, three familiar teams would once again be declared champions, with a fourth team making a run through the event and claiming their first tournament championship in years.

The Day of Champions began with the Women's Final at 1PM where a strong back and forth game played out with the Bella Bella Nation finally overcoming the late game push from Hazelton to reclaim their title from last year.

The number one seed heading into the tournament was full value for their standing, never getting rattled as they worked their way through the tournament play of the week, holding back the challengers who were looking to deny them an opportunity for a repeat.

Saturday's final, was similar in nature to some of the previous match ups of the week, a fast pace and some strong defensive play among the key factors, with the challenge from Hazelton in the waning moments denied as the clock wound down, making for a final score of 56 to 50 in favour of Bella Bella.

The Master's took the court mid-afternoon two familiar rivals as Hydaburg and Old Massett showcased their skills to an appreciative crowd in the 2:30 Final.  The match up for the Master's Final most likely not much of a surprise to any at the Civic Centre, the two teams considered among the favourites in the Division prior to the first tip off of Tuesday.

Both teams built their momentum through the week, like two heavyweights eyeing each others results as they came in, each success along the way setting the scene for the Saturday showdown.

In the end, much like last year, the Hydaburg squad was able to dig deep in the final quarter, knocking back the challenge from Old Massett and claiming the Masters Final by a Score of 76 to 65.

The Intermediate Final highlighted the focus that the Port Simpson/Lax Kw'alaams team had brought to the tournament all week, with the Strike Force dominating Bella Bella from the opening tip off.

For the Bella Bella team, the long grind of the tournament and a high tempo qualifying game of earlier in the morning finally took its toll. As the team from the North end of Tuck Inlet took control right away and never let up on the gas, pushing through both halves on the way to a convincing 92 to 47 victory.

Saturday's success in the Final for Lax Kw'alaams/Port Simpson was the first Championship for the community in that Division in decades and sends a signal that with a core group that seems very familiar with each other, the prospect of a run at the top might be in the cards for a few years to come.

The marquee event for the evening was the Seniors Final, with a packed Russell Gamble Gymnasium settling in for a thoroughly entertaining finale to the 2016 Tournament. The final two squads from Skidegate and Kitkatla having climbed through the tournament from Day One,  registering some impressive numbers as they charted their course to the final.

The only blemish on the Kitkatla record for the week, a twelve point loss Thursday to Skidegate, an omen of sorts for what Saturday night would bring.

While Kitkatla put in a strong showing and provided a few nervous moments for the Skidegate squad in the final rematch, it was the experience and past success in the Finals for the team from Haida Gwaii, which provided for the patience to keep Kitkatla at arms length.

Skidegate survived a number of pushes from their opponents, eventually putting some distance between the two teams, with Skidegate in the end able to sail to a twelve point victory by the final whistle, with the Saints on the successful side of the 78 to 66 final score.

The Tournament had a number of key moments for participants to take home with them from their week in Prince Rupert.

Starting with the spectacular opening ceremony presentation hosted by Metlakata, Alaska; through the festival atmosphere found around the Civic Centre and on to the highly celebrated Hall of Fame ceremony at the end of the week. The Friday night event providing the fans one more chance to celebrate those that have helped build the tournament through the years.

Enshrined into the Hall of Fame for 2016 were Vera James from Metlaktla, Alaska, Tricia Helin from Lax Kw'alaams and a ground breaking athlete on the North Coast in Roberta Edzerza, one of the first women to ever play in the annual tournament.

Controversy as well however, marked this years tournament with early concerns over LNG sponsorship by some participants, giving way to the story of Josiah Wilson, a surprising development which resonated far beyond Prince Rupert.

The decision of the ANBT Organizing committee to disqualify the Wolf Pack player from the Heiltsuk Nation over questions of his First Nations identity, is one which it now seems will leave Tournament officials with a number of questions to review.

The controversial disqualification has created a situation that will require a much more expansive answer from officials, and one that has the makings of an issue that may go beyond the nature of the rules and regulations of the annual tournament.

The national spotlight fell on the All Native Tournament this week, and the organizers didn't appear to come out of the week's events offering up a dialogue that provided for much in the way of satisfaction for many.

The various issues beyond the results of the daily score sheets, made for a number of concerns that will need to be addressed in the off season.

A discussion that is clearly required, in order to ensure that in the future, the main stories from the Tournament keep the focus of the week directed to where it should be. Celebrating the spirit of the competition, culture and the gathering of communities that the event brings to Prince Rupert each year.

Controversial moments aside, the tournament play provided some exciting basketball and made Prince Rupert the centre of the Northwest for the week, the streets busy, the stores, restaurants and hotels feeling the benefit of the annual influx of visitors that February brings.

The city had a buzz that has lasted about seven days, an indication as to the All Native Tournament's place in the much anticipated schedule of community events on the North Coast.

You can review some of the news items of both the pre tournament period and through the events of last week from our ANBT News archive page here.

A look at those daily scores through the week that we could track down, can be found from our Results Archive here.

Any final notes from the tournament organizers will be added to those two archives as the post tournament week moves on.