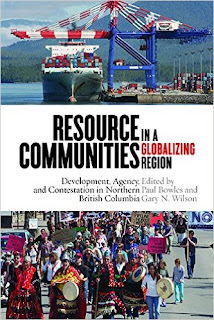 The publication, the combined work of five professors from the Prince George based University provides a wide ranging review of International trade and the place of the northern half of the province in that ever changing landscape.

This book examines and explains how this new globalizing phase is occurring and with what consequences. As a distinct region, northern British Columbia provides a timely and compelling case study for examining the impacts of globalization on northern, resource-based regions. -- From the Introduction to Resource Communities In a Globalizing Region, a new study from UNBC into the impact of Globalization on Northern British Columbia.

Six UNBC professors were involved in the wide ranging project, taken from a number of disciplines at the University from anthropology, economics and political science. The close partnership of Gary Wilson, Paul Bowles, Fiona McPhail, Tracy Summerville, John Young and the late Jim McDonald brought the extensive review together.

The thrust of the work is to review what small communities across Norther British Columbia are facing when it comes to the challenges of globalization and how governments, First Nations, labour and the private sector are viewing the change and what impact it is having and what changes it may be bringing.

The introduction of the book, which outlines some of  themes to be explored can be found here.

The Prince George media offered up a number of items related to the launch of the book last week.

The study of Globalization is however not something done on a tight household budget, seeking out more background on the changing nature of trade and how it impacts Norther BC requires not only a investment of time to read through its 312 pages, but a bit of a financial investment from the reader as well.

“Northern British Columbia is at the centre of a profound global transformation, the implications of which are critically important, not only for this resource producing region, but also for the rest of British Columbia, Canada and the world ... From ports to pipelines, communities across northern British Columbia are being profoundly affected, both positively and negatively, by major developments and reorientation's in the global economy. At the same time, however, these communities are also seeking to control their own destinies and have a say on the changes that are sweeping the region.” -- Dr. Gary Wilson of UNBC, providing a glimpse into a new book on globalization published through UNBC.

The UBC Press publication is currently selling for the price of 99 dollars, it's now available on line through the UBC Press website or Amazon.ca

Proceeds from the publication are being directed to the Dr. James McDonald Memorial Fund at the University of Northern British Columbia.

UNBC celebrated the launch of Resource Communities in a Globalizing Region, with this information release on Monday.

Email ThisBlogThis!Share to TwitterShare to FacebookShare to Pinterest
Labels: Book on Globalization and its impact on Northern BC now available