Shirts of a pink hue have been prominent in schools and around town today as students, teachers, parents and concerned citizens took some time to address the issue of bullying and the need to raise awareness of the issue.

School District 52 made note of today's efforts locally during their meeting of February 9th, noting that February 24th was the date for the province wide awareness initiative.

An interesting survey from the Angus Reid polling organization on the topic provides a glimpse into the situation, highlighting the work that remains to be done in making for a better atmosphere for all whether at school, other places or through other activities. 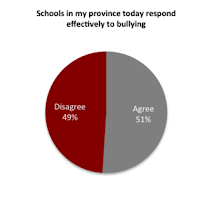 In the survey, Three-quarters of those Canadian adults who participated say that they were bullied in school; while half of today’s parents say it’s happened to their kids.

A slight majority of those who replied, 51%,  say that the School's handle the issue properly, while the remaining 49% say that there is more work that needs to be done.

With respondents in British Columbia most satisfied with the response of educators and administrators, with 57 per cent from the province stating that schools are reacting appropriately well to bullying, those in Alberta are least confident in how effectively schools are dealing with the problem (47%).

Whether those who took the survey had been bullied or not, Canadians are unequivocal in how much gravity they give the issue of bullying in schools today. Fully nine-in-ten respondents (89%) say it’s either “very serious” (47%) or “serious” (42%).

You can review the full findings from the Angus Reid study here.

The province has been highlighting some of the efforts across British Columbia today through the BC Government portal.

More on the erase bullying program can be found here.

Email ThisBlogThis!Share to TwitterShare to FacebookShare to Pinterest
Labels: Anti Bullying Day in BC