City's CFO charts the Budget process ahead for City Council

Prince Rupert City Council received an update on some of the budget issues that they will be considering this spring as they move forward with the City's budget process, with the City's Chief Financial Officer delivering her report on where the city's finances are at heading as the City moves towards the Budget consultation sessions.


Monday evening, Ms. Corinne Bomben offered up the annual review of the City's financial situation, providing a video display session which outlined the details of the financial plan for the year ahead.

The report opened by providing some of the service challenges that the city faces each year at budget time, highlighting the expenses and the limited options in revenue collection.

Starting with the operation of the Digby Island Ferry, Ms. Bomben explained how neighbouring communities benefit from their proximity to the service but only pay a user fee. Further noting for Council that the residents of Prince Rupert not only pay the user fee but provide a subsidy, which for 2016 is expected to be at the 1 million dollar mark. 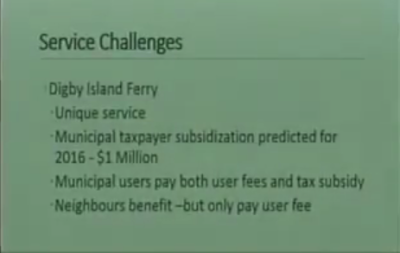 The ongoing issue of Provincial Tax Caps on major industrial operations was explored, with a revew as to how all of the city's industrial operating activity qualifies for these capped rates. Something which means that the city receives diminishing revenue from those areas.

To go along with the industrial cap issues, Ms. Bomben also outlined the nature of the low returns the city receives from the provincial offset grant process. 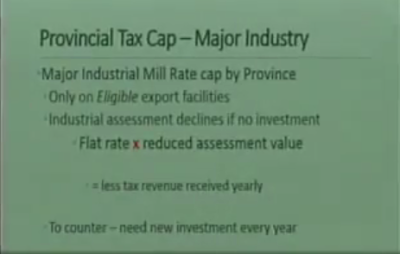 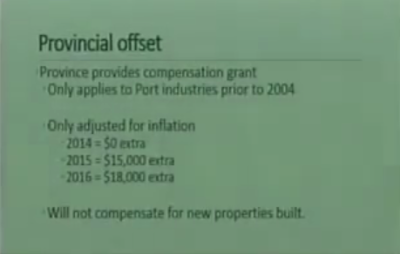 The Tax Cap Legislation burden that is found from those conditions placed on the city was highlighted, showing the impact that is found on residential, light industrial and commercial sectors which require increases each year to make up for the transfer of that burden. Which is the main contributing factor towards the tax rate increases in the community.

Ms. Bomben  made a point of noting that all of the Port of Prince Rupert's tenants in the area pay the full 100 percent of taxes that the city bills them, but that its the limitations that are in place by the provincial legislation that is providing for challenges for the City. 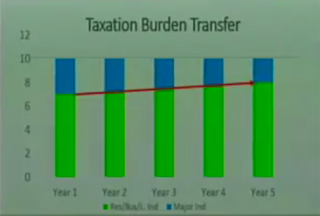 Budget requirements related to preparing for growth were reviewed, noting that the city will continue to fund planning for Major Projects initiatives through Legacy Inc, those programs last year provided for studies on land base use and population surveys, as well as the start of the Re:Design Prince Rupert program through UNBC's Community Development Institute.

This years budget will provide for the same level of funding to the Major Projects initiatives.

There will be no increases to the mill rates when it comes to the funding of civic operations, however to focus on reserves and future capital replacement issues, the Finance Department is recommending a 2 per cent increase to the mill rate for 2016 for those purposes.

To help those following at home, Ms. Bomben then outlined how the mill rate works and how home owners could determine how it would be applied. Noting that the "mill rate" would be reduced once again as it has over the last four years and explaining how that would impact on Taxpayers in the community. 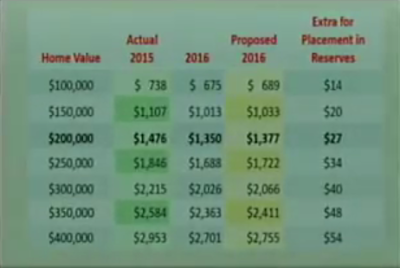 As well, she noted that BC Assessment will release their revised roll which could provide an impact on the proposed mill rate.

To close her presentation the City's Financial Officer noted that the public will have two opportunities to offer comments on the Budget Process, the first at a community forum at the Lester Centre on March 14th, the second at the March 21st session of Prince Rupert city Council.

Council was asked to defer any decision until after those public consultation sessions in March.

Council members asked for some clarifications on the industrial taxation levels and how much revenue the Recreation Department would be receiving through the increase in fees adopted earlier in the month.

Councillor Mirau asked for some clarification and discussion on the nature of the Ridley Island Tax Sharing Agreement on Ridley Island between the City and the District of Port Edward, she provided some background on the topic and offered to provide a more expansive report on the situation for the next council session.

Council then accepted the Report for further consideration.  You can review the documentation that accompanied her presentation from the City's Agenda package on Page 7, it features a number charts on revenues and expenditures for further examination.

More on the Budget Presentation and the full Council Session of Monday night can be found on our Council Timeline Feature.

You can review the full presentation to Council from the City's Video Archive it starts at the 37 minute point and continues until the sixty one minute point.

You can follow the 2016 Budget process through our archive page here.

While further items related to City Council discussions can be found on our Council Archive page here.
Posted by . at 10:11 AM

Email ThisBlogThis!Share to TwitterShare to FacebookShare to Pinterest
Labels: 2016 Budget presentation to Council