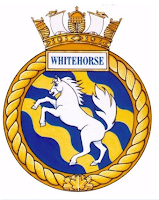 A Coastal Defence Vessel from the Royal Canadian Navy's  Pacific Fleet is in Prince Rupert today, with HMCS Whitehorse tied up at the Atlin Terminal dock, ready to welcome visitors aboard later this afternoon.

The ship, based out of the Dockyard at CFB Esquimalt is currently taking part in sovereignty and presence patrols, as well as to continue to hone the skills of its sailors for a range of naval operations along the North Coast and

It arrived at the Atlin Terminal on Monday, as part of their stop over in the city the ships company is providing tours to the public this afternoon from 1 until 6 PM, offering a chance for residents of the North Coast to learn more about the tasks that the Royal Canadian Navy take on along the North Pacific coast.

Their stop over on the North Coast makes for a much different experience than their travels of just two months ago, an item posted to the Royal Canadian Navy website highlights the journey of HMCS Whitehorse to joint exercises with US and Mexican ships in late December.


HMCS Whitehorse is one of twelve Kingston Class Coastal Defence Vessels in the Canadian Fleet with home ports of Esquimalt and Halifax.

Some notes on the capabilities of the vessels can be found here.