On Monday night members of Prince Rupert city Council offered their support towards a correspondence from the City of Port Coquitlam, seeking a change in the formula for funding under the Federal Government's Build Canada Grant Program.

The letter from Port Coquitlam is part of a resolution from that community for the Federation of Canadian Municipalities and Union of British Columbia Municipalities that calls for a reduction in the municipal requirements for the Grant Program, calling the current level of one third of the cost as too high for local jurisdictions.

At the moment, according to the correspondence from Port Coquitlam the current level of funding rests at one third each from each level of government, with Port Coquitlam instead recommending a change in that formula, one that would see the Federal Government provide 50 percent of the funding, the Province to deliver 40 percent for significant projects, which would leave the municipalities to provide for the remaining 10 percent.

Corinne Bomben, the City of Prince Rupert's Financial Officer read the correspondence into the record at Monday's Council session and offered up an explanation for Council members of the details related to it. 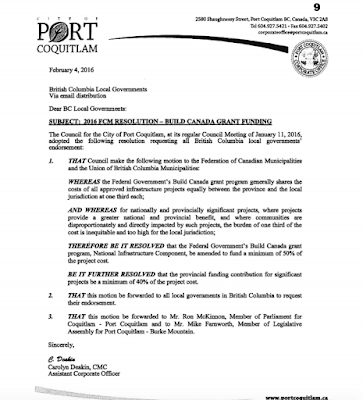 At the conclusion of her presentation on the topic, Council members followed up on a motion from Councillor Mirau to offer their support to the proposed resolution from Port Coquitlam.

You can review the short discussion on the topic from the City's Video Archive starting at the one hour one minute mark.

The full correspondence from Port Coquitlam can be found as part of Monday's Agenda Package on page 15.