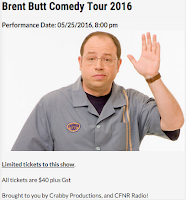 Brent Butt, the twitter happy Canadian comedian with a fondness for the Vancouver Canucks will be bringing his stand up show across Northwestern British Columbia this spring, as he embarks on a six city Northern BC tour in May.

Perhaps best known for the his CTV comedy show Corner Gas, still found on the Comedy Network, the highly acclaimed Canadian comedy which featured an ensemble cast offering up their observations from the local gas station on life in the fictional town of Dog River.

Butt has been a fixture on the Canadian scene for years, transplanting his roots on the prairies into a comedic view that has taken him across the country with a number of shows and projects, covering everything from stand up to television to film.

The Prince Rupert show is set for 8 PM on May 25th at the Lester Centre for the Arts, with tickets going for 40 dollars.

Following his stop in Prince Rupert he'll be in Terrace May 26th, Smithers May 27 and Prince George on May 28th before heading into the Cariboo with shows in Williams Lake and Quesnel.

You can learn more about his career and what's up next for him from his website.
Posted by . at 9:01 AM

Email ThisBlogThis!Share to TwitterShare to FacebookShare to Pinterest
Labels: Brent Butt to tour Northern BC in May