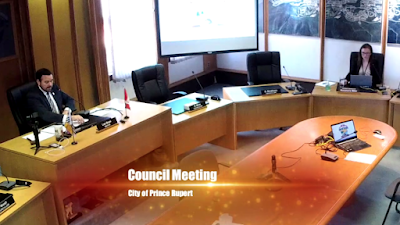 Monday's Prince Rupert City Council session offered up a most unusual situation, with an all but abandoned City Council chamber, with only the Mayor and some senior staffers on hand, while all six of the city's council members participated by phone.

The reason for the new reality, the introduction of social distancing requirements in the wake of the COVID-19 situation in the province, with the City Council session morphing into kind of a television phone in program.

While there was an Agenda, it's pretty safe to assume that  the budget presentation and zoning work on the night was of little interest for those in the community.

Many of whom perhaps, who may have suddenly discovered that they host Council meetings every two weeks or so and viewed in on Monday through the city website and CityWest options.

The main attraction on the night was the City's discussion and vote on the Mayor's motion to introduce a Local State of Emergency, the Council moving to endorse a wide range of measures recommended by a panel of local doctors in the community.

Some background on the work of Council on the evening and the various Regular Agenda elements for the March 23rd Council session can be explored here.

Council also hosted a Closed Session earlier in the evening, the details as to why they required the doors to be closed for the 5PM meeting can be reviewed here.

The regular monthly Committee of the Whole session and its public comment opportunity, which comes with the final council meeting of each month was cancelled on March 18th. (see notice here)

Further information from our overview and placement in the video archive can be found below, with the permanent record of the minutes added as they are posted to the city website.

That cancellation was announced on March 18th.

( 1:00 -- 37:00 ) Petitions and Delegations Introduction of Motion to Declare a State of Emergency -- Mayor Lee Brain introduced his motion to put in place a State of Local Emergency in Prince Rupert.

You can review two elements of Council's work on the motion below, the first the Mayor's outline of the State of Emergency provisions, followed by our account of the statements from the Six City Council members.

Six who said Aye ... Council members statements on the declaration of a Local State of Emergency in Prince Rupert


( 37:00 -- 42:30 ) 2020 Budget Presentation and Public Comment Period --  Acknowledging that the routine matters of the evening were somewhat less of importance compared to the State of Emergency motion, the Mayor moved forward with the Council agenda on the night, with the first item for review that of the next step in the City's Budget process for 2020.

The City's Financial Officer Corinne Bomben, provided for a brief overview of the Budget and Five Year Financial plan.

Noting how the community was in uncertain times, she observed that the city has not been told if their legislative responsibilities have been delayed in light of the pandemic.  And with that advisory, the City's CFO advised that they would continue on with the second public engagement period as part of the meeting that evening.

Ms. Bomben also stated that to this point the City does not anticipate any significant changes as a result of the pandemic, but should that situation require it,  they will make the changes and communicate them to council.

Her overview of the Budget planning, followed the same themes of the February 24th and March 9th reports, though she did make note that the hard copies once available at the Library, Civic Centre and City Hall were no longer accessible, advising residents towards the city website for a review of the documentation.

She then outlined how the community engagement process has been modified in wake of the city's recent moves to limit access to City Hall, pointing the public towards the Rupert Talks program with a current survey period to come to an end on March 27th.

The CFO advised that in light of the changes to access to civic facilities,  the city will be making alternative plans to deliver any of the survey findings to the public.

Ms. Bomben wrapped up her presentation by advising residents that if they have questions on the Budget process they could contact the City at 250-627-0935 or by email at finance@princerupert.ca

Mayor Brain did not offer an opportunity for any of the Council members to ask any questions related to the revised engagement plans or other elements of the Budget.

( 42:30  -- 43:00 )  Report from City Planner on Variance Request for a property on 8th Avenue East -- Council members participating by phone, offered no comments or questions and passed the motion to send the request to final consideration.

The Mayor almost skipped the Council opportunity for public comment, first calling for an adjournment before Councillor Randhawa interjected to ask a question.

The City Councillor then asked for the Mayor to take a request to the Emergency Operations Centre that the city's gas stations shift to a full service model.

Mr. Randhawa also asked that the city publish the phone number of the Emergency Operations Centre for the public to ask quesitons and seek answers if they have any.

The Mayor stated that he would have that number posted to the internet.

Councillor Randhawa was the only member of Council to have any comments or questions as part o the Reports and Comments portion of the evening.

With that Council adjourned their meeting.

You can access our archive on the City Council Session here,  where a number of items regarding the council session, including links to local media coverage, can also be found.

As always, our Council Timeline is only a reflection of our observations from the Council session of the night. Be sure to consult with the official minutes from the City, when posted to their website for further review.

Official Minutes of the Regular Council Session from March 23, 2020 (not available yet)

In addition to the city's official minutes, the City's Video archive provides a helpful record of the events from each public council session.