"Slight chance of optimism perhaps, that rate of growth is being impacted by measures put in place the last few weeks" -- Dr. Bonnie Henry on BC'S COVID-19 response

As they promised on Thursday, Dr. Bonnie Henry and Provincial Health Minister Adrian Dix provided for a briefing today that outlined some of the modelling that the British Columbia Centre for Disease Control have created to explore the potential trajectories for the COVID-19 outbreak in the province.

With Dr. Henry allowing for 'perhaps a slight chance of optimism' she relayed a wealth of information from the findings, taken from the vast amount of work that had been assembled.

With the doctor noting how they are confident that the data available now provides for a good sense of where BC is trending at this time. 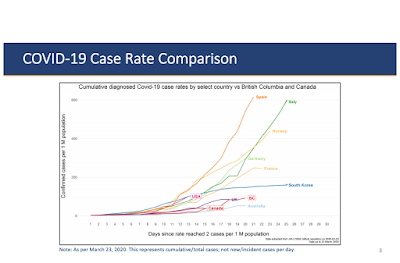 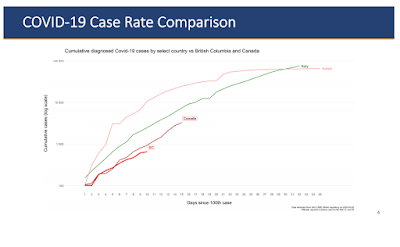 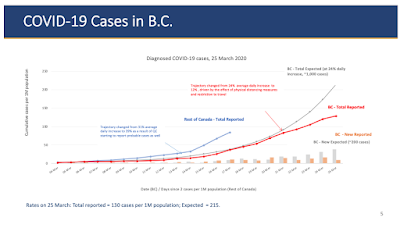 From the slide above, Dr. Henry noted that while the trend has been upwards in the last few weeks which had been anticipated, that there may be a bit of bend in motion towards flattening the curve.

The Province's Public Health Officer noted how the key element of getting a reliable amount of data is vital, with focus of approach on the testing strategy.

Dr. Henry highlighted how in recent weeks they have shifted the strategy from testing those who have returned to the province from other countries, to changing the program towards community and people who are getting infections in BC and in the health care sector.

Noting that outbreaks and transmission in those places could have an impact not only on health care workers but on facilities across the province.

The province is also conducting over three thousand tests a day, focusing on the highest risk populations which is higher than most jurisdictions and is comparable to such countries as Singapore and South Korea. 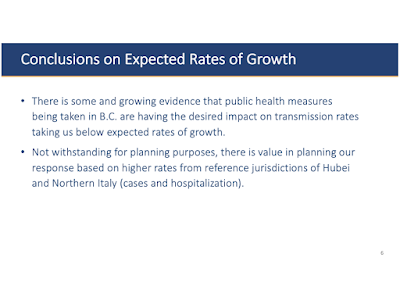 Both Doctor Henry and Health Minister Dix did not want to build any false illusions however.

Reinforcing the message that the current measures in place are working, but that British Columbians must continue to adhere to the program in place and make note of the Public Orders that have been installed.

And that was because we realized that we seeing transmission, in the community that was not related to travel or to known cases. So very early on we put in some of these now very restrictive measures that we've been seeing put in place in countries around the world ...

All of those implementations started the week of March 15th/16th, so for me when I'm looking at this curve I know that there are people who were exposed to this virus prior to that date who are going to become sick in the fourteen days after that exposure.

So it is not surprising and we've been seeing that in the last ten days we've started to see that people are becoming ill.

That these important measures that we have put in place, that all of us need to pay attention to, those distancing measures, we are going to start to see the impact of those in the coming week to two weeks.

So the second incubation period from when they started, so when we look at this graph that's what we're starting to see in the red line, and I'm not trying to over call it, but I do believe we've seen a flattening a falling off of that curve" -- Dr. Bonne Henry, BC Public Health Officer

During his portion of the presentation Health Minister Adrian Dix reviewed how the preparations for what may be ahead has seen the province identify 17 primary COVID-19 sites, with observations on British Columbia's capacity to meet demand. 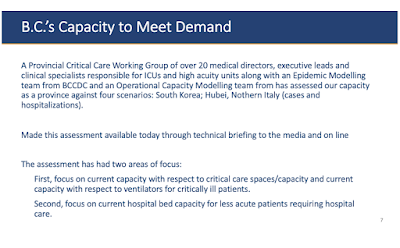 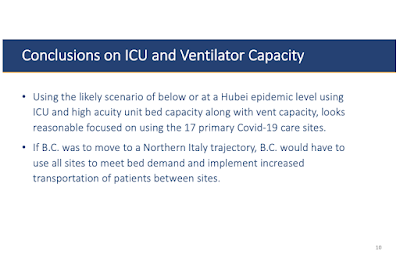 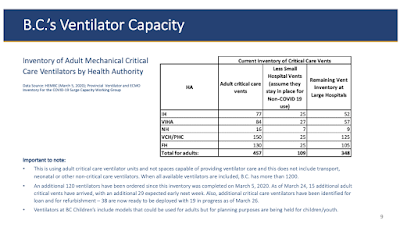 Towards the preparation for the outbreak, the work to date has also provided for a range of planning sessions that noted the impact that could come from scenarios that include South Korea, Hubei and two models on Northern Italy.

Mr Dix reviewed the work towards hospital capacity projections,  how they are redeploying staff across all health regions. With Health Authorities province wide implementing measures towards equipment and staffing requirements.

"While we are absolutely determined to have the best results; we are preparing for the worst possible scenarios

As the days of the epidemic pass here in BC, our needs will become more clear.

Towards the best possible outcomes the Health Minister spoke to what's required to bend the curve and to make the projections better.

The Minister noted how British Columbians need to give:

He further outlined how they are prepared for all potential impacts on what may come over the next number of weeks, offering a look two scenarios and what they anticipate. 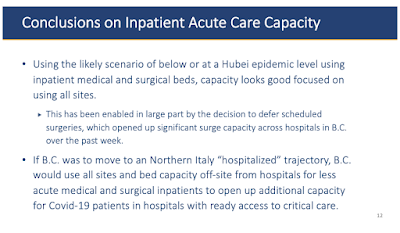 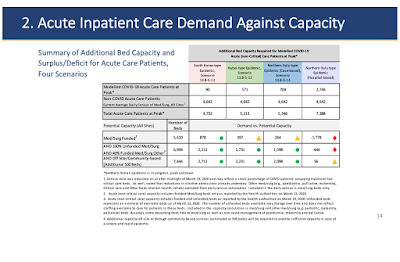 Dr. Henry and Minister Dix take us through all the data through a video hosted by the Provincial government website.


A collection of the slides used as part of the presentation can be accessed here.

The up to date listings of Public Health Officer's Orders and Notices can be reviewed here.

Email ThisBlogThis!Share to TwitterShare to FacebookShare to Pinterest
Labels: Modelling on potential COVID-19 impact in BC