Province of British Columbia suspends all Local States of Emergency; introduces range of new measures under Provincial State of Emergency

Calling for the province to all pull in the same direction, the Premier and Solicitor General announced a Single Action Plan, with the province taking a much more active role in planning for transportation, redeploying municipal bylaw officers to enforce Dr. Henry's orders and to reduce the patchwork of local declarations of Emergency that had been put in place in some communities.

Towards that goal, the Solicitor General announced the Suspension of all municipal Local State of Emergency declarations, with the exception of those in Vancouver which fall under a charter of the City of Vancouver.

"I also acknowledge the steps many that many communities have already taken to respond to this crisis, many local governments have declared local states of emergency in an effort to combat this pandemic on the front lines. But in these unprecedented times it's more important than ever to coordinate emergency response to better serve and protect British Columbians.

Effective immediately Municipal States of Emergency related to COVID-19 are suspended, this will ensure a coordinated approach is taken under the  Provincially declared State of Emergency.

Local governments are key partners, to that end, local governments are being asked to identify and  make available any publicly owned facility that may be used for pandemic response, including facilities for self isolation, medical care and testing.

They must respond to any requests for information from the province to identify resources and critical supplies and service needs" -- Solicitor General Mike Farnworth outlining the new measures in place as the province takes central control to the COVID-19 response. 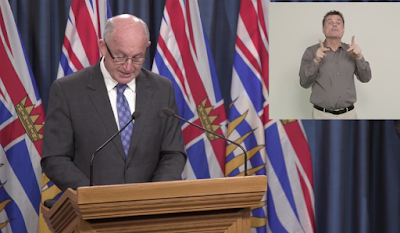 Using the powers under the Emergency Program Act, the Minister issued a series of ministerial orders to ensure for that coordinated approach the province desires:

Enforcement: Enabling municipal bylaw officers to support enforcement of the provincial health officer’s orders for business closures and gatherings, in line with offences under the Public Health Act.

Protecting B.C.’s most vulnerable: Making it easier to support critical services for vulnerable people, like food banks and shelters.

Co-ordination: Suspending local states of emergency specific to the COVID-19 pandemic, except for the City of Vancouver; giving municipal councils the ability to hold more flexible meetings to expedite decisions; and co-ordinating potential use of local publicly owned facilities, like community centres, for self-isolation, testing, medical care, warehousing and distribution.

As part of the moves to reign in those communities that had gone on their own with initiatives like Prince Rupert, the Premier noted that the province wanted to reduce anxiety and address those local plans that would have significant impact on their neighbouring communities.

"First of all we didn't want to see a patchwork emerging across British Columbia, one of the earlier questions was about how do we ensure continuity of information, reduce confusion to the greatest extent possible.

And if you have different jurisdictions in different parts of the province invoking different powers that are inconsistent with their neighbours, that leads to first of all a leap frogging effect.

An expectation in Community A, that if Community B has done something, then I have to as well.

We want to reduce anxiety, we want to increase public confidence and the best way to do that is too have a uniform approach" -- Premier John Horgan

The recent themes introduced by Prince Rupert Mayor Lee Brain made for a number of questions from reporters at the briefing, with both Premier Horgan and Solicitor General Farnworth outlining how the need to ensure that the guidelines from the Public Health Officer of BC remained as the only focus for how the COVID-19 situation is to be addressed.

Many of the measures that Prince Rupert City Council had forwarded towards the Emergency Operations Centre for potential implementation seemed to be somewhat of an over-reach by the municipality and a tad out of the scope of power of local government.

Of note at the time of the declaration on Monday, Prince Rupert's City Council members never spoke to the actual list of measures as outlined by the Mayor, nor did they fully explain how they could enforce any of the edicts that normally fall to the authority of Provincial and Federal responsibility.

Since their declaration of Monday, the City had only issued two local orders to date.

As of today, Prince Rupert had been the only local municipal government in the Northwest to put in place the Local Declaration of State of Emergency with their measures by far much more expansive than any other local government.

As we noted earlier today, both Port Edward and Terrace, chose not to do the same, noting of their wish to work with the Provincial government in a collaborative fashion.

To make sure that the over riding message of the day resonated fully, time and time again the Premier and Solicitor General noted that this is not the time for a patchwork approach, but one which called for a unified message; one that serves to ensure that the measures recommended by Dr. Bonnie were being adhered to.

"I want to be clear, as the Premier just said a moment ago,  Dr. Henry's orders are not suggestions or good advice, they are the law. And as Minister of Public Safety I will exercise my powers under the Emergency Program Act to ensure that those laws are enforced.

That is why today, based on the recommendation of BC's Health and Emergency Management Officials I am taking the unprecedented step to issue a series of orders for the duration of this Provincial State of Emergency to support our Provincial Health Officer and Minister of Health in our swift and powerful response to the COVID-19 pandemic.

The full session from the Premier and Solicitor General, including the question period with reporters can be reviewed below:

The details towards today's announcement, with more background on the measures now in place can be found here.

Email ThisBlogThis!Share to TwitterShare to FacebookShare to Pinterest
Labels: Province of BC suspends all Local State of Emergency Declarations related to COVID-19