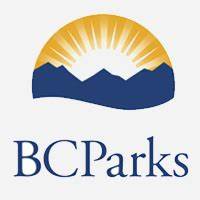 Escaping to the Great Outdoors is going to be a bit more complicated for British Columbians as the BC Government continues to step up its response to COVID-19, with one of their latest moves to close a number Parks and recreation areas across the province.

The announcement from Tuesday noted that the closures were put in place towards compliance with social distancing concerns.

That as Parks officials throughout British Columbia began to see an increase in visitors, but with many people not complying with the provincial health officer’s (PHO) requirement for families and individuals to stay at least two metres away from others.

Something that noted puts the most vulnerable populations at risk. BC Parks has heard concerns from the public, RCMP and First Nations, as well as regional and municipal governments about the increase in visitors and is implementing full closures of certain parks throughout the province.

“The mental and physical wellness benefit of being outside during the COVID-19 pandemic response is important, but keeping people safe right now is the most important thing we can be doing. Until we flatten the transmission curve of COVID-19 and people strictly comply with the PHO physical distancing requirement, provincial park access will be restricted.” -- George Heyman, Minister of Environment and Climate Change Strategy.

The closures are in addition to a previous suspension of services and facilities in provincial parks, including visitor centres, nature houses, washrooms and day-use areas. In alignment with Parks Canada, all campgrounds are closed until April 30, 2020.

In the Northwest, the focus of the Closures to date is in the area of the Nass Valley parks and protected sites of the Nisga'a, areas which the Nisga'a Lisims government put off limits last week.

The Full list of British Columbia closures can be found below: 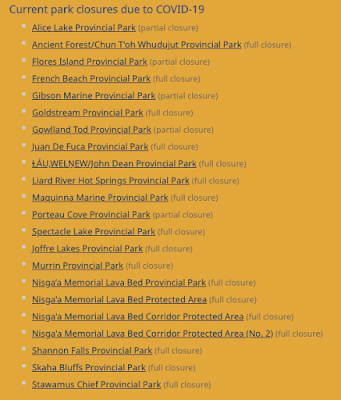 More background on the Provincial order can be reviewed here.
Posted by . at 4:25 PM

Email ThisBlogThis!Share to TwitterShare to FacebookShare to Pinterest
Labels: BC Gov't closes a number of Parks and Recreation areas