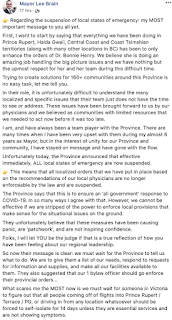 To read the Mayor's Social media feed last night, a long list of his regular followers appear to be in lock step formation with Mayor Lee Brain's rather strong stance of disappointment towards the Provincial government decision to suspend all Local States of Emergency.

Many of the Mayor's followers weighed in with comments of support, others with a fair bit of misinformation, more than a few suggesting that the Provincial Order from Thursday has now somehow put the the residents of Prince Rupert in danger, something that in itself is more than a little alarmist and frankly wrong.

The Provincial Orders of Dr. Bonnie Henry are still in place as they  have been since March 16th, issued to provide for the best guidance of the British Columbia Centre of Disease Control, Dr. Henry herself having been in the front lines of past SARS, H1N1 and Ebola crisis situations. 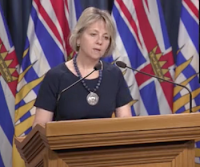 The idea that the medical professional who has been the most measured
source of advice and guidance since the virus arrived, is not going to take the calls of local doctors that may have concerns, suggestions or recommendations seems folly.

Though on facebook it seems, there are many self proclaimed practitioners of virology with a dissenting opinion.

To review some of the statements that came following the Mayor's lengthy rebuttal of the Premier and Solicitor General, a number of the Mayor's followers now somehow believe, that Premier Horgan and the government don't understand the region and have contemptuously disregarded the local council.

The Mayor's latest post and the comments that come with it only seem to have fed ongoing anxiety for others, who then join in on the conversation.

Now as things evolved from last weekend, the Council members and local doctors clearly were reacting to the COVID-19 situation with the utmost of concern for community; as we imagine most residents of the region who watch for the daily totals and ongoing guidance from Dr. Henry have.

Though the frequent updates on Facebook by the Mayor, with ever increasing messages complete with thread after thread of commentary, sometimes left more than a bit of confusion as to what guidelines should be followed and which ones were actually enforceable.

An ever evolving situation which only served to make for mixed messages and in a situation as a serious as a pandemic that's a dangerous thing to itself.

That concern is perhaps what led the Premier and Solicitor General, after taking the pulse of the province through the week, to come to the conclusion that with a growing number of local declarations in place, with what they described as a patchwork of regulations and orders, that it was time to try and refocus everyone on the work and guidance of Dr. Henry.

The Mayor has somehow taken valid concerns over COVID-19 and how to respond to the virus in the city and now seemingly turned the discussion into some form of a call to action to respond to a perceived power grab by the province.

Even though the city appears to have strayed out of their scope of influence and in reality had little in way of enforcing many of the list of recommendations from local doctors, let alone having ever really fully discussed them with the public one by one.

To make things even more confusing, as part of Thursday's posting, the Mayor has stated that the City will continue to go ahead and make its own recommendations for the community to follow as a suggestion.

Even though there is no way to enforce those measures, something that may dilute the adherence to the actual orders that are in place and must be followed.

"So here's what we are going to do: on top of promoting all provincial orders, we are going to make 'recommended' local orders anyway. Yes, we have no way to enforce them, and we have no way to ask you to do anything legally speaking ... The only way it happens is all organizations, unions, industry, businesses and residents believe that we should enact localized provisions together and make it the law of the land ANYWAY. "

Also of note, the loud and at times angry voices of the Mayor's Social media feed, which seems to serve as a bit of an echo chamber, for whatever reason rarely brings out any brave residents daring to share contrary opinions.

Those that do, seem to get scolded for having their own opinion, or raising concerns contrary to the themes of the mayors commentary; in some cases as was the case last night, they even get taken to task by current members of city council.

While the focus that the Mayor puts on these contributions seems to create the belief that the entire community somehow is engaged,  it should  not be forgotten that there are many people who don't use Facebook.

And unfortunately, or maybe fortunately, considering some of the commentary of late; the wider community outside of social media never really had any idea of the tempest that was brewing from the ongoing chatter.

There are at last count from the census somewhere around 12,000 residents said to be living in the community. For some of them Social Media is just not a frequent, nor an important element of their lives.

Thus with the members of City Council now seemingly deferring the discussion to the Mayor and his Facebook feed and his followers, they effectively have abandoned a significant segment of the community; as well as to side step their role to be part of the discussion on behalf of those who elected them.

The Mayor it seems will continue to air his grievances with the province, having now declared that any local concerns of residents on a range of issues such as housing, the homeless and other social concerns should now only to directed to the province and the local MLA.

Seemingly washing City Council's hands towards any need to be involved in the lives of their residents.

"Unfortunately any community issues moving forward regarding housing, childcare, homelessness, etc are to be sent to Jennifer Rice's office as her and her team are now in control. You can forward your concerns to Jennifer Rice by calling 250-624-7734 or e-mailing jennifer.rice.mla@leg.bc.ca."

That's playing politics in a time of crisis and this ain't the time for that.

The main focus for the moment should be the most urgent one, that the Public Health Officers Orders are being followed, the need to limit the noise that drowns out or distorts that message is something that should be addressed as soon as possible.

Email ThisBlogThis!Share to TwitterShare to FacebookShare to Pinterest
Labels: Governance by Facbeook