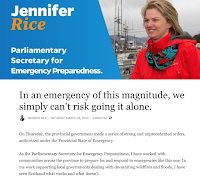 North Coast MLA Jennifer Rice published a letter to constituents this weekend, providing for some further notes to the events of the last few days in the region.

Among some of Ms. Rice's themes:

"It’s not a time for politics or posturing. It’s a time to give the professionals what they need to do their jobs.

When facing a fire, you call firefighters. And when facing a pandemic, you call people like Dr. Bonnie Henry and the health officials fighting COVID-19.

Dr. Henry has unparalleled experience fighting infectious diseases, including Ebola and SARS. She guides every decision taken by the Province, including the orders issued on Thursday.

These orders are designed to ensure that every community is coordinating together under one plan. They ensure the province can be more responsive to the unique needs of communities like ours."

The letter available here, posted to Facebook, was received and responded to by many of the  familiar names of followers of the Mayor's social media streams; correspondences that replayed many of the same responses of disappointment, kind of a Prince Rupert bot army if you will.

Among the contributions at one point was one from Prince Rupert City Councillor Wade Niesh, who has apparently appointed himself as the key member of the Mayor's Praetorian Guard, ready to respond to any statement contrary to the city's position. 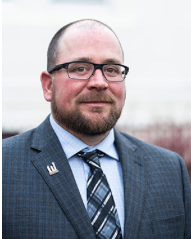 Though it appears that his response to the MLA's letter has unfortunately since been removed from the MLA's feed.

A decision which in itself shows in a way how unreliable Facebook may be when it comes to being a valuable source of full information on any topic, let alone one involving a pandemic. ...

Prior to the purging of his commentary, Mr. Niesh had raised a number of themes related to his areas of concern related to Provincial/Municipal relations, a reinforcement of familiar comments from the past that he no doubt will share if you drop him a line ...

It makes for a topic that should probably be explored further in a public forum at some point ... but not today and not in the immediate future.

The political back and forth and very, very different view on governance a theme for a different day, and during a much less critical period in time

At this point in time, the only information that anyone should be paying attention to are the orders and guidance of the Public Health Officer for the Province of British Columbia.

For the moment, if City council members can shift their eyes and fingers away from their Facebook posting for a bit, they might want to give some indication as to the constructive steps that they can take towards the future.

Offering some guidance on some of the tangible preparation in the community, within their scope of duties, that they can direct towards where need is greatest and to which they can effect assistance.

Maybe by helping the Food Bank to replenish dwindling stocks, like some other communities are doing; or to outline which civic resources they will provide for the province towards the wider pandemic response plan, including some emergency housing for the homeless.

As well, in this new era of Social Distancing ... an idea might be for the Council members to vow to put some distance between themselves and Social Media for a while ... and just release only vital information  through the city's website, sharing the important news with everyone in the city that will need to hear the message.

More items of note on local announcements of the last week can be explored here, while Provincial updates can be reviewed here.
Posted by . at 6:18 PM