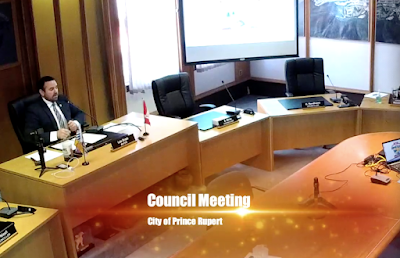 With one final vote, that by Mayor Lee Brain cast at 7:25 on Monday evening, Prince Rupert was put onto a path of a State of Local Emergency.

The expansive level of recommended civic measures, making for the City's upgraded response to concerns relayed by a number of local physicians related to the arrival of the COVID-19 coronavirus in British Columbia.

The road towards the State of Local Emergency began with the Mayor sitting in an all but abandoned City Council chamber, with all six elected councillors participating in the session by phone. 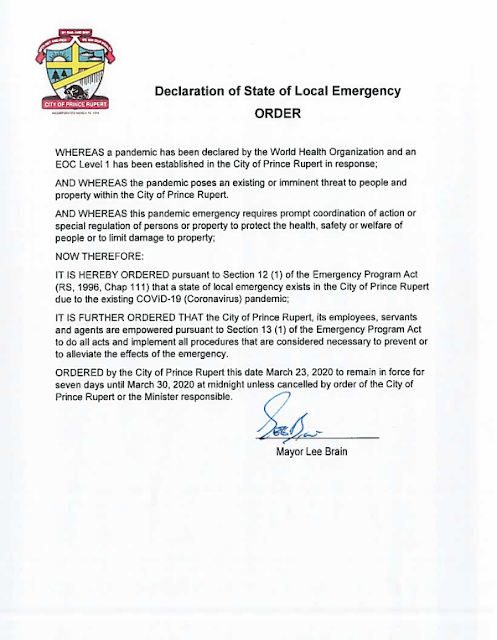 Prior to the vote each of the City Council members provided for a short review of their reasons to put in place what could be a wide range of measures to go along with a call for residents to shelter in place with only short opportunities to leave our homes for shopping and exercise and little else.

The roll call of all six elected Councillors and the Mayor charting a course ahead for at least the next seven days, with the Mayor suggesting that its range of provisions could last up to four months.

The Mayor in his preamble to the vote made note of the efforts locally to this point, as well as the Provincial response and the hard work of Dr. Bonnie Henry though observing how not everyone was following her guidelines.

"This is a very serious matter and in a community that is on an island in the north that has limited population and limited resources ... one outbreak here could be devastating to a community such as ours.


Observing on the current work of the Provincial government, Mr. Brain noted how the City would be working on a local response, putting in place certain things to protect the community at another level.

"It's not that the province isn't listening or doing anything, they are dealing with the macro issues and doing everything that they can, but right now there are some specific things for Prince Rupert that need to come into place. So that we can ensure that we are not a statistic and I think that's the mission here"

The actual list of restrictions and new regulations won't actually be clear until sometime later this week.

Those notes to be further outlined once the membership of the Emergency Operations Centre reviews the lengthy collection of recommendations from the Doctor's group and local physicians, notes which became the impetus towards the pending suspension of life as was considered normal at 7 PM when the City Council session began.


That body that will now oversee the day to day happenings in the community consists of a team of emergency personnel from RCMP, Fire Department, City staff, Incident Command, Northern Health, Physician’s Group, NCRD and others that were unnamed by the Mayor.

As he prepared to read off the lengthy list of recommendations the Mayor noted that:

"What I am going to read to you tonight, is not going to be in effect tonight; but that they are recommendations from the physicians group of this community on the example types of orders that our EOC should consider and should implement.

Mr. Brain further observed as to the scope of change ahead for the community.

"I also want to say that these orders are not necessarily designed to limit people's lives, as it is as about we are all going to be living a certain way for three months, or more.

The list of recommendations that will be considered before being acted on include:

Each of the Orders that Mayor outlined included numerous additional elements that impact not only on residents of the city, but surrounding communities as well.

The three main take aways from the Mayor's presentation include the order that will basically have residents shelter in place and maintain physical distancing , the need for anyone coming to this community by any mode of transportation from any location to go into immediate 14 day self isolation (something that is not currently a law) with the final note of interest one that the Provincial Highway will remain open to travel.

Following his review of the four orders and the associated elements that go with them, none of the elected Council members offered up any comments, our sought out any clarification on any of the recommendations that the Mayor had read off.

The items now move forward, destined to be reviewed by the Emergency Operations Centre.

While there have been no confirmed cases of COVID-19 reported in Prince Rupert to this point, Mayor Brain noted that if things get to a point where there are confirmed cases, even more measures could be put in place.

"If things proceed and they get to a point where the community has seen confirmed cases and there is another level of action required; the Emergency Operations Centre is designated and has the authority to take increase actions.

I understand that there are people in this community who want to see very, very strict actions and some people who don't want to see many actions at all and there's a balance between all levels of action.

And we will ensure that we are working very closely with the EOC to hear and have the community's needs heard and met, but at this time we are in a State of Emergency and it's time to move quickly and put a face on the local context of this community "

For all the thirty five minutes or so of review, the declaration from Monday night left many loose ends, with little guidance from Council for city residents who no doubt will have many questions.

Some perhaps seeking clarification on such matters as adult children continuing to be able to travel in town to see their parents in their parent's homes should they be Seniors or Elders care providers, whether households can swap off on the one family member only shopping expeditions, or whether those residents who may make multiple shopping trips for many families will still be able to do so.

Not to mention the many other elements of every day life of Monday that are about to change and  probably fall under the freedom of mobility rights of what is still the Canadian Charter of Rights and Freedoms.

How many of the recommended orders as outlined by the Mayor make it to the final declarations remains to be seen, the final list to be determined by the new panel of the EOC.

Hopefully Mr. Brain, his six supporting Council members and City staff will clarify much of the message of Monday night sooner, rather than later and explain how they may plan to enforce many of the measures on the list.

In the end, the province actually will have some say in the City's moves from Monday.

As the legislation in place stands, the city's declaration will be forwarded to the Provincial Government for review, which as is noted as part of the declaration could see the Province cancel the Council order at any time.

The first seven day period will come to an end on March 30th.

Considering how Solicitor General Mike Farnworth on Monday had been busy urging communities across the province not to make such declarations fearing for chaos province wide, any upcoming exchange between the City and Province could make for a very interesting conversation.

We may even hear something on the City's announcement from the local MLA Jennifer Rice, who also serves as Parliamentary Secretary for Emergency Preparedness.

While Ms. Rice has been busy sharing the provincial message, she has not had much to say on the topic of any potential State of Emergency in the community since it was first brought up by the Mayor through the weekend.

For those who missed the Council session tonight, the declaration of the State of Local Emergency can be reviewed through the City's Video Archive.


The introduction of the Declaration Opens the presentation, with the council membership statements of support following.

The Mayor's recitation of the four Orders and the range of additional elements associated to them can be found at the twenty three minute mark.

A look at many of the previous actions taken locally can be reviewed here.

More notes on the work of Prince Rupert City Council can be found here.

Email ThisBlogThis!Share to TwitterShare to FacebookShare to Pinterest
Labels: Local state of Emergency in Prince Rupert