Residents and Visitors to the city that park in the downtown area will want to keep an more watchful eye on the clock from now on, as the City has launched what it describes as 21st century bylaw enforcement measures for the city's parking areas.

The City of Prince Rupert announced today that it is now using a new Bylaw enforcement vehicle in the community, making use of specialized software and infrared cameras that are designed to take pictures of licence plates, in effect providing for electronic chalking of parked vehicles in the community.

And while your vehicle may be feeling nervous about being photographed, the city stressed as part of today's announcement that the cameras are not designed to take photographs of people.

Efficiency was the theme from a media release from today, as Mayor Lee Brain outlined the city's ambitions for the new vehicle.

The new software program allows for the bylaw officer to do all three routes in under 45 minutes and means that more frequent parking checks can be conducted during a shift.

In a case of any dispute the Bylaw Officer will be able to generate a print out that  will show the map location of the first and second pictures, as well as such information as Plate number, GPS location, civic address, date and violation.

More background on the new addition to the city fleet can be found here.

Not noted in today's announcement was the final cost to the City of the new vehicle and specialized equipment required for new approach towards parking enforcement.

A quick search of the Rainbow Chrysler Dodge website indicates that a fairly bare bones 2016 Ram ProMaster 1500 Van is listed at starting at $33,495, further costs would be found with the software package and infra red camera additions. 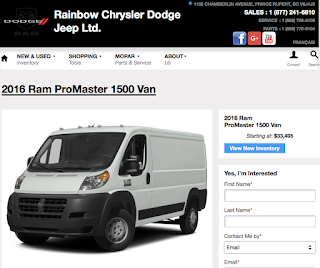 For more items related to the City of Prince Rupert see our archive page here.
Posted by . at 10:24 AM