There was a bit of rust on display in the first three minutes of the ice breaker to the 2020 Provincial Basketball tournament, but once they shook that off, the Charles Hays Rainmakers were back in top form as they claimed their first victory in defence of their defending AA Championship status.

The Maker's actually fell behind in the early stages of Wednesday's tournament tip off, with the Samuel Robertson Titans taking a quick 4-0 lead, making their early shots which was well received by a large contingent of their fans on hand from Maple Ridge at the Langley Events Centre.

In those early moments, the Rainmakers shots just would not drop, though the lack of early success clearly did not rattle the defending AA champs, who knuckled down and had their game back on track by the midway point of the first quarter.

The Makers' catching up with Robertson and starting to build on their lead taking things to a 17-9 advantage by the end of the first frame.

As that gap began to build into the second quarter, the Maker's opposition began to rely more and more on three point attempts, some of which were successful, but others not, the latter making for turn overs that the Rainmaker's were able to take advantage of taking a 31-20 lead into the room at half time.

Solid ball control and stellar distribution kept the Robertson team off balance, with the Rainmakers making the  most of their time in the offensive zone in the third quarter, building to a 49-34 advantage by the three quarter time.

The Maple Ridge Seniors showed no sign of quit however, hoping to chip away at the growing Rainmaker lead in the final quarter, though as earlier, mostly by relying on three point shots, something that had limited success.

Strong board play in the Rainmaker end, ensured that there were not many second chances for the Titans and while the Charles Hays boys shut the door defensively, they also continued to find success up court, taking any potential wind out of the sails for Robertson on the way to the 71-42 final. 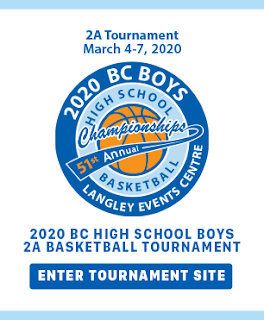 By games end, Charles Hays had controlled much of the play through the game, holding the lead for 35 minutes of the 40 minute matchup.

Tyler Jones led they way on the score sheet for the Rainmakers on twelve minutes of play, with Rylan Adams and Kai Leighton also having an impressive day on the floor.

Rainmaker coaches Mel and Ryan Bishop handled their bench well, with good management of the roster to the final moments of night number one.

With their first win now in the rearview mirror, the Makers turn to their next challenger, with a 6:30 match up tonight with St. Thomas Aquinas, the fighting Saints coming off a high scoring opening  90-84 victory overPrincess Margaret.

Rainmaker fans can access the streamcast of the tournament from the Pay Per View portal on the tournament website, keep an eye on the CHSS twitter feed for updates on tonight's game and their plans to Live stream the matchup at the Multi Purpose Room at the Prince Rupert boulevard campus.

You can review more of the 75th Anniversary of the Provincials from our archive page here.

Email ThisBlogThis!Share to TwitterShare to FacebookShare to Pinterest
Labels: Rainmakers off to strong start at 2020 Provincials