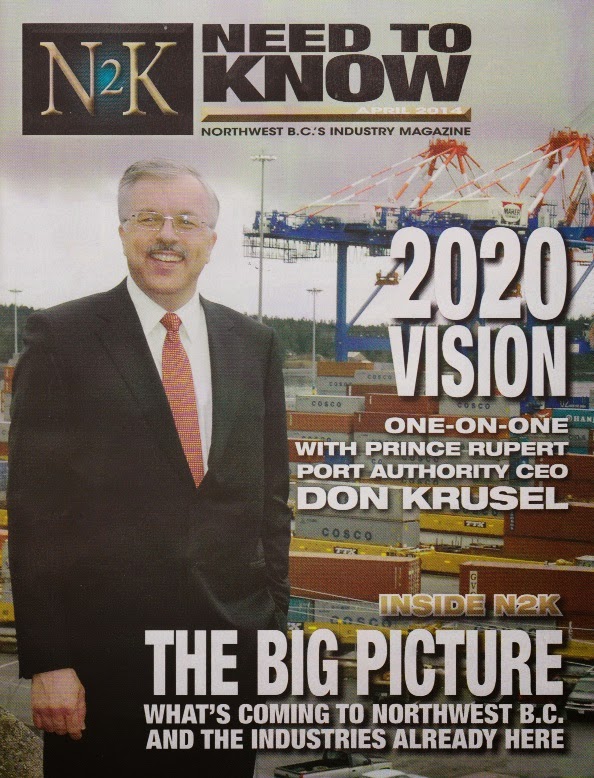 As you worked your way through your shopping flyers this week, perhaps you noticed something new and just a little bit glossy in among the grocery store offerings.

Tucked inside your weekly Wednesday paper, was a shiny new publication from the folks at Black Press, publishers of the Northern View and other local newspapers of Northern British Columbia.

Mr. Hamilton describes the new magazine, as something that will be focused on Northwest BC industry and the people who make it all work.

The monthly effort will make use of assets from all of the newspapers of the Black Press chain across northern British Columbia.

It's a fairly interesting gambit, this glossy magazine launch. Libraries and recycling centres are full of the ghosts of past magazines that faded from the publication cycle as the world began the migration away from print, so it will be worth watching as to the longevity of Need to Know.

A cover story featuring the Prince Rupert Port Authority's Don Krusel, the article calling on the history of the region and how the Port has seen tremendous growth in the last few years. For anyone who has ever taken in a Don Krusel speech on port developments, the article reads like the script to one of his presentations.

As well as the focus on the Port, Need to Know provides an overview of developments at Kitimat's Rio Tinto Alcan operation and for good measure an interview with Black Press owner David Black, who gets some prime magazine space to review his plans for an oil terminal in the Kitimat region.

Of course, a magazine that publishes as a monthly proposition, will probably find that sometimes the story that is published is quickly eclipsed by current events.

None more so than the Need to Know look at the exciting plans of WatCo for Watson Island, monthly deadlines being what they are, the fact that WatCo is now taking the City of Prince Rupert to court did not make the debut edition.

The focus of the new venture clearly seems to be one of a salute to the new era of industrialism in the region. There seemingly for the moment at any rate, is no room for any real controversial topics, such as discussions on the themes of environmental reviews, concerns over pipeline developments, or lets say the concerns regarding tax issues from some local communities.

The magazine does deliver advertising however, one feature that was the focus we imagine when it was pitched to the Black Press print barons of the south.

To go with the cover story on the Port there's a full page ad from the Prince Rupert Port Corporation.

The debut edition also features a full page ad for Tricorp in Prince Rupert. As well as a collection of full page ads for three LNG companies in the region.

With  LNG Canada in Kitimat, as well as for Pacific Northwest LNG and the Prince Rupert LNG Group for the BG LNG project all featured in the advertising push.

An interesting section of the new publication is its overview of LNG development in the region. Something that regular readers of our blog might find as a rather familiar thing, having discovered much of the same kind of content on the blog for a while now.

One of the features of the North Coast Review since we launched it way back in 2011, has been our archive of industrial items (see here) from across the Northwest.

A key part of our presentation, and a feature that has outlined the path of industrial change and the impact that those changes have had on the region.

Our archive provides regular updates to the theme, as developments change in the region, delivering the latest items of note as they happen.

That of course is a little harder to do with a monthly publication schedule, though we imagine our service could be of some use to the Need to Know gang, as they work towards the next deadline for publication.

For the moment it appears that Need to Know is purely a print offering, as there is no online portal available for their new publication.

So those inclined to read the features (and the ads) will have to wait for the door to door delivery each month. Or head out and seek a copy of the publication at news stands, doctor and dentist waiting rooms or in the glossy paper section of recycling centres across the region.