Prince Rupert City Council continued on with their budget deliberations on Tuesday, a special session of Council called to review their financial plan and how they wish to go forward with it.

With Mayor Mussallem and City Manager Long both absent for the evening's review, it was left to the city's six councillors to move the Bylaw process forward, after having received the latest update from the City's Financial Officer, Corinne Bomben.

As part of her review, Ms. Bomben offered up news that the dividend from CityWest would now be 400,000 dollars, an increase that allowed for a change to the taxation requirements from last week.

In addition, she introduced the prospect of collecting 4 dollars per passenger from the Airport, not by way of an increase on the Airport Ferry, but rather through payments as part of the Loan process for Airport improvements.

With the Airport redirecting that money as part of their payment to the city on the recently approved loan. The City would then allocate the money towards the transportation requirements.

Ms. Bomben also outlined some of the revisions in the BC Assessment Rolls and how it would impact on the Budget process. 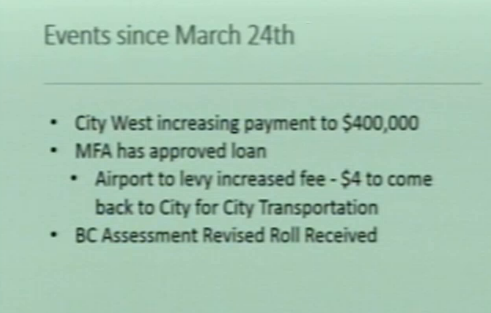 With that brief synopsis of the changes, Ms. Bomben then outlined that the newly created Airport Fee and CityWest dividend increase would be added to a projected 5 per cent User fee increase as of July 1st. She also advised that her projections were based on a full PILT from the Port for 2014. 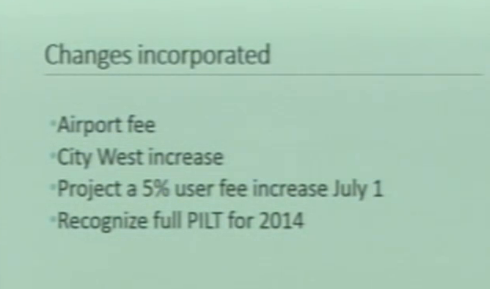 (The revised revenue projections can be viewed through the City's Video Archive player, making up the first eight minutes of the night's proceedings, be warned the audio from Tuesday night's session is very poor)

With those financial changes as their markers for discussion, Councillor Ashley, who was sitting as chair for the evening, opened up the process for discussion.

As has been the theme for much of their discussion time thus far, Council spoke to the issues of the Port of Prince Rupert's contribution to the financial requirements of the city, as well as to take another shot directed to the province over the caps that they place on industrial taxation across the province.

Both points that obviously will resonate with a population base weary of increased taxes, but for the purposes of the 2014 budget, they were mostly talking points that were really irrelevant to the task at hand, that of wrapping up their budget decisions.

Council spent far too much time Tuesday venting about their frustrations with the Port and the province, with Councillor Cunningham returning more to his earlier points on the port from when he first arrived on council.

During Tuesday's session, he frequently observed how in his opinion the Port continues to get richer, while the city gets poorer, suggesting that Council needs to keep working to gain a larger share of money that he believes the city is owed.

Councillor Cunningham for the most part had a lot of company on the theme, with Councillor Thorkelson also outlining her concerns with the levels of revenue gained from the Port and through the provinces caps on taxes.

All of it of course an intriguing theme of the night, but one which became a meandering discussion point that tended to take Council frequently off its course and took away from any other suggestions on how to reduce costs and avoid increases to taxes or reductions to service.

For the most part, the input on the Port for Tuesday was more in the way of theatre, than of any particular use to the job at hand.

Council members may find the recently updated Frequently asked Questions page from the Port helpful for further review, outlining from the Ports point of view the current situation as far as taxation and PILT issues.

Though we imagine it won't do much to address their anger or concern over the topic.

The bulk of the Port discussion can be found on the City's video archive  the council strikes back against the port portion of the night runs through  the 21 minute to 54 minute mark for the most part, though they return to the theme through the final half hour of the discussion as well.

On the main issues that they could actually control, Council had a few ideas to bounce around before they finally got to the vote which set the path ahead.

Among a few of the thoughts, a cancellation of the trip to Ketchikan, charging more rent to the carnival when it comes to town, as well as the possibility of reducing the number of trips of the Airport Ferry.

The Recreation department took up a fair amount of discussion on the night, with Council eventually deciding not to increase fees to those facilities. However, one aspect of recreation that Council did not include in their review of Tuesday was the Golf course.

With no discussion on taking another look at the grant process for the facility and perhaps whether those that use the golf course could participate more towards of the funding of the recreation option.

Councillor Thorkelson offered up an extensive review of what she believed home owners should pay in the way of taxes to the city, suggesting that a 2 per cent increase wouldn't be out of line, observing that in her opinion on a house valued at 300,000 dollars that tax increase would add up to the cost of a couple of lunches at McDonalds.

She suggested that even in an election year, Council needs to be honest with the public about its costs and the need to provided funding for those costs, even if it impacts on the taxation levels (the election comment was not taken to kindly by Councillor Kinney later on in the discussion).

She  also outlined her thoughts that the City should have a COLA (cost of living allowance) built into their yearly deliberations.

Councillor Thokelson then followed up on the theme of cuts to services that Councillor Garon had made earlier in the night. Making her case against any further cuts to city staff or services, stating that the city has been making sacrifices year after year and that there is not much left to cut.

Of note, as part of the concern over taxation levels, none of the six made mention of the rate increases for City Services that council put in place in January. Increases that saw increases of five per cent for Prince Rupert residents and a topic that might have helped to hit home the burden that local residents continue to face.

The full review of the city's current financial situation can be found on the City's Video Archive, it makes up the last half hour of the night's discussion.

As for the actual financial decisions, with the CityWest dividend now increased, the Airport funding issue addressed and the Recreation Centre exempted from any fee increases Councillor Thorkelson's modified final bylaw would look like this:

Increased property taxation levels of 1.2 per cent, the five percent increase to user fees  for a number of city services, except for the recreation centre and with no use of the City surplus.

With the discussion on the theme exhausted, Councillor Thorkelson's modification to the original Financial Plan Bylaw was put to a vote and accepted, by a margin of 4-2.

Councillors Ashley and Kinney held to their original opinions and voted against the plan.

However, Prince Rupert's taxpayers may want to hold off on thinking that this will be the final word on the topic.

The City still has yet to see any final number regarding the PILT payments, so working on the assumption of a full payment may be a little optimistic.

In addition there may yet be a few budget surprises, Council did not mention, let alone discuss the recent revelation that the Watson Island issue may be heading back to the courts. If the last trip to the courts was any indication, that could an issue that has an impact on the financial plan moving ahead.

Labour costs as well could provide for a change in the dynamic of the budget (remember last spring and the agreement with CUPE (never publicly revealed) that made all of Council's previous budget work moot).

So, perhaps the most important question of the night came at the twenty one minute mark on Tuesday.

When Councillor Ashley asked of Ms. Bomben, about the timeline of the motion and the ability change the terms of the Financial Bylaw.

Should Council decide to bring their financial plan to a public forum before final approval, or even if they hear a few concerns from the public at future council sessions, the process could indeed see some  change.

Or,  should Council receive yet more spring surprises such as the Watson Island story, or a shift in the anticipated PILT funding between now and the final vote,  then the dynamic of Tuesday's prospective bylaw planning may change yet again.

For more items of interest on Council see our archive page.