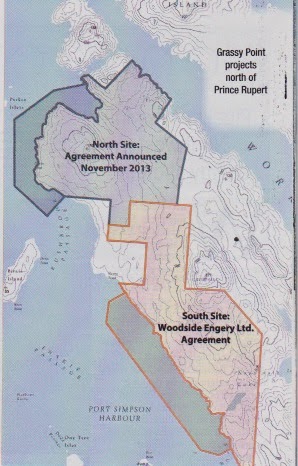 Wednesday brought another day of milestones for North Coast development of LNG infrastructure.

The Premier heralded the signing of a revenue sharing agreement with the Lax Kw'alaams and Metlakatla First Nations, as a commitment towards reconciliation. Adding that it was an agreement which would create jobs as well as grow the economy and strengthen communities.

From the announcement of today, both First Nations will share a portion of provincial government revenues from the Sole Proponent Agreements related to Grassy Point lands and proposed developments of the Aurora and Woodside LNG projects.

Both Natural Gas Development Minister Rich Coleman and Aboriginal Relations and Reconciliation Minister John Rustad highlighted the certainty that the agreement brings to the region.

A partnership between the First Nations, provincial government and industry proponents that should provide the tangible benefits that First Nations leaders have been seeking from development in the region.

Towards that theme, leaders of both of the North Coast First Nations also hailed the agreement as one that will provide benefits to their communities

“We want to make sure our voice is heard when it comes to development within our traditional territory ... “These LNG revenue-sharing agreements are a good demonstration of what can be achieved when we approach development in the spirit of partnership and collaboration.”  --  Chief Harold Leighton, Metlakatla First Nation.

“Our goal is to make sure our community has access to the right opportunities, through economic development, education and social development" ... “Working with government and with these proponents on revenue-sharing is positive progress in our drive to ensure LNG has real, tangible benefits on the ground in the Northwest.” -- Mayor Garry Reece, Lax Kw’alaams First Nation.

And while today's news is indeed positive news for the region, the framework agreement however is still something that is very much for the future.

Of the proposed developments for the North Coast, both the Aurora and Woodside developments are still a fair ways behind the pace of the more prominent plans of BG Gas and Petronas.

And with most LNG observers suggesting only a few of the growing number of projects for the North Coast will ever reach the finish line, the agreement of today still has a ways to go before it delivers much of what it promises.

Still, for the two First Nations communities with an interest in the Grassy Point ventures, today's announcement provides the blue print for further involvement and benefits from the two proposals.

As well as an indication that First Nations in the region are engaged in the process and looking to see the region's economic base continue to expand.

More background on the announcement of Wednesday can be found here.

For more on the proposed developments at Grassy Point see those entries from our LNG archive page
Posted by . at 2:10 PM