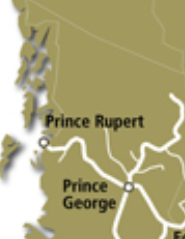 It would seem that Prince George wants a share of all of the LNG excitement, with Rich Coleman the Minister of Natural Gas outlining some talking points that most likely have residents there ready to claim a stake in the ever changing landscape.

One item from last weeks Prince George appearance that might be of interest to Prince Rupert residents, is Coleman's suggestion that one potential LNG proponent is proposing that their shipments of LNG would travel by rail to terminal facilities at Prince Rupert.

Coleman didn't offer up much in the way of specifics on that plan, other than  suggesting that the placement of Prince George as a key transit area for the LNG by rail plan, offers that community the chance to capitalize on the ongoing LNG planning in the province.

Beyond that, Mr. Coleman provided a fairly enthusiastic review of what impact LNG could have on Prince George in the way of spin off benefits to local industry, as well as increased investment in the Central Interior.

The Natural Gas Minister also outlined some of the aspects of the LNG Buy BC Program, which is designed to bring the business community together to learn more about opportunities that could be available as the LNG industry begins to take shape in the province.

The LNG-Buy BC Program will be introduced to the Northwest later this week, with sessions planned for Kitimat (April 15)  and Terrace April 16.

Prince Rupert is scheduled to host one of these "boot camp" sessions, but no date for the three hour information program for local service providers has been confirmed for the North Coast as of yet.

You can learn more about what that program is all about here.

The Prince George media has much on Mr. Coleman's LNG information session, the main reviews can be found below.

For more on LNG developments on the North Coast see our archive page.
Posted by . at 8:24 AM