Waiting for those Trinidad recollections 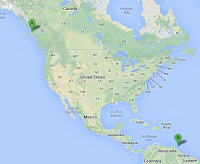 When we last heard word of pending travel plans for City of Prince Rupert councillors, there were two on council seeking to take advantage of a travel opportunity from the BG Group.

Both rather anxious it appeared to learn more about BG's Trinidad and Tobago operation.

As we outlined on the blog on February 26th, at that time both Councillor Garon and Councillor Carlick-Pearson had put their bid in for the chance to take the trip.

Though by the time that February 24th council meeting came to an end, there was no clear indication whether one or both would be making the journey.

Since that time, there has been no update or mention of the proposed trip at any of the Council sessions that followed.

Worth noting however are the attendance listings for Council since that time. With both Councillors Garon and Carlick-Pearson having missed sessions of Council, since that February 24th discussion when the prospect of international travel was first raised.

Last fall, Mayor Jack Mussallem took advantage of a travel offer from the BG Group, making the trip from Prince Rupert to the Caribbean to learn more about the LNG development that BG operates there.

A surprise trip that was first mentioned at the October 15th council session.

The Mayor  later followed up on his trip with a small report for Council, outlining some of the aspects of his journey and what he discovered from his trip.

Most might wonder what more could be learned from a trip to the Caribbean, as far as how Prince Rupert will have to adapt to large scale development.

As we've mentioned, thus far we have not heard from Council, if one or both Councillors did make the trip offered by the BG Group (described by the City Manager as at no cost to the city).

If they have made the trek south however, they should be encouraged to provide some form of a synopsis of their travels and how their research could be applied towards Prince Rupert's preparations for the proposed LNG industry.

At the time of the Mayor's trip to the Caribbean, there was a fair amount of interest from the Vancouver media on the nature of such paid journeys by community politicians and how they might be perceived.

So one might think that following up on the proposed trips is something that would be expected by not only the media, but from the remainder of Council members.

Some of whom may wish to review whether there is any benefit to this aspect of foreign travel, or if perhaps something a little closer to home might provide more answers for the city as to what may come with increased development.

Considering the impact that such large scale developments may bring, a trip perhaps to Fort McMurray, Alberta which has been dealing with boom times for a number of years now, may be a more reliable barometer as to what to expect once the construction phase of our proposed developments comes on stream.

There are more items of interest on City Council developments on our archive page.